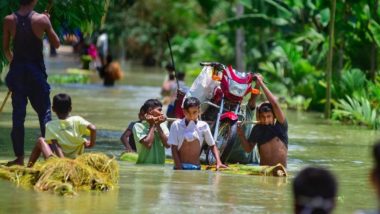 Guwahati, July 25: The flood situation in Assam continued to remain grim with the death toll in the northeastern state rising to 97 on Sunday. The Assam State Disaster Management Authority (ASDMA) informed that over 26 lakh people have been affected in 27 of the 33 districts of the state due to the deluge. The total death toll due to floods and landslides has risen to 123. The ASDMA said while 97 people died in flood-related incidents, 26 were killed in landslides. "With the death of one person in Morigaon district, the toll in this year''s flood and landslides has risen to 123", the ASDMA said.

Th deluge has damaged roads, bridges and many other infrastructure at various places. The wildlife in the state has also been severely affected. The state government said that a total of 129 animal casualties have been reported at Kaziranga National Park and Tiger Reserve, Bokahat due to drowning and other reasons. This includes 14 rhinos, 5 wild buffaloes, 8 wild boars, 2 swamp deer, 95 hog deer, 1 sambar, 3 porcupines and 1 Python.  Assam Floods Devastating Images: Houses Submerged, Several Animals Dead as Brahmaputra River Water Level Rises.

In Assam, Goalpara continued to be the most affected district with 4.7 lakh people hit by the deluge, followed by Barpeta (4.24 lakh) and Morigaon (3.75 lakh). The Brahmaputra is flowing above the danger mark at Guwahati, Tezpur, Dhubri and Goalpara towns. Its tributaries such as Dhansiri, Jia Bharali, Kopili, Beki and Sankosh at Golokoganj in Dhubri are also flowing above the danger levels at various places.

(The above story first appeared on LatestLY on Jul 26, 2020 01:04 PM IST. For more news and updates on politics, world, sports, entertainment and lifestyle, log on to our website latestly.com).