The probe committee was constituted by Assams Wildlife Department to ascertain the actual cause of the death of 18 wild elephants including calves on May 12 night in the mountainous Kandali Proposed Reserve Forest (PRF) in Nagaon district. 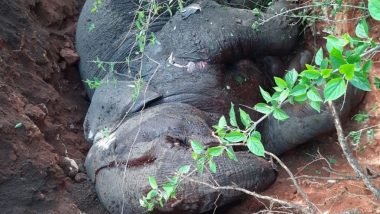 Guwahati, June 3: Dispelling all speculations, an Assam government probe report, released on Thursday, said that the 18 wild elephants, found dead in Nagaon district on May 12, were killed after being struck by a "massive lightning bolt".

Releasing the 10-member probe committee report, state Environment and Forest Minister Parimal Suklabaidya said that 18 elephants' death due to lightning has been established with clinching evidence.

"The exhaustive report incorporating post mortem and reports from concerned agencies have proved beyond doubt that lightning caused the death of a herd of elephants," he told the media.

The expert group report said: "The autopsy report suggests that as per in situ spot evidence, the death of the elephants in the herd may not be attributed to any infectious pathological agent or any toxin or poison."

"The investigation report suggests that there does not appear to be any foul play such as conscious attempt of electrocution, revenge killing, poisoning, anthrax outbreak etc. Hence it can be deduced from the evidence available, which point to the cause of death of the 18 elephants by accidental electrocution due to lightning," the report said.

The probe committee was constituted by Assams Wildlife Department to ascertain the actual cause of the death of 18 wild elephants including calves on May 12 night in the mountainous Kandali Proposed Reserve Forest (PRF) in Nagaon district.

Many organisations, experts and environmentalists had earlier termed the death of 18 wild elephants as very "mysterious" and demanded thorough probes by independent agencies and experts.

According to the local people and the forest officials, the carcasses of the elephants were found scattered at different places in the deep forest area.

Yadava said that cases are often reported of lightning striking animals and five elephants had died due to this in West Bengal recently, but the May 12 incident in Nagaon is huge and terrible.

According to the latest census, India is home to 27,312 elephants and of them, Assam is home to an estimated 5,719, many of whom constantly come out of the forests in search of food.

(The above story first appeared on LatestLY on Jun 04, 2021 12:04 AM IST. For more news and updates on politics, world, sports, entertainment and lifestyle, log on to our website latestly.com).