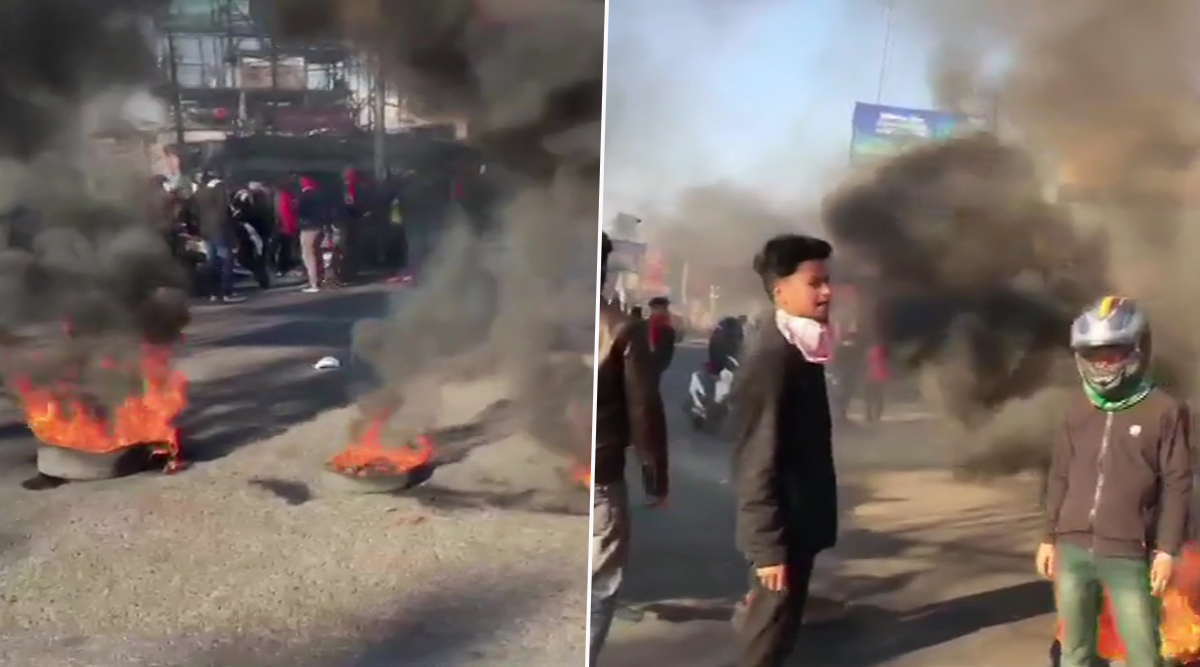 Guwahati, December 10: Normal life was hit in parts of Assam following a shutdown (bandh) called by several organisations against the Citizenship (Amendment) Bill 2019. The Bill was tabled in the Lok Sabha by Union Home Minister Amit Shah and was passed in the house past midnight on Monday. The North East Students' Organisation (NESO) and All Assam Students' Union (AASU) declared a bandh in several parts following which shops, schools, colleges were shut majorly in Guwahati and Dibrugarh. In many places, protesters burnt tyres and blocked roads and national highways. All shops, markets remain closed in several districts, causing inconvenience to people.

Security forces have been deployed across the state to keep the situation under control and avoid any untoward situation. According to ANI, the All Assam Students' Union (AASU) held protest in Dibrugarh against the Citizenship Amendment Bill. Protesters burnt rubber tyres on the streets but were soon detained by the police. Reports inform that in Golaghat, some locals protested half-naked against the bill following which, police resorted to lathi-charge in order to disperse the crowd. 'Citizenship Amendment Bill Not Even .001% Against Minorities': Amit Shah Rebuts Opposition's Anti-Muslim Charge in Lok Sabha.

Assam: All Assam Students' Union (AASU) holds a protest in Dibrugarh against #CitizenshipAmendmentBill which was passed in Lok Sabha, yesterday. pic.twitter.com/En1Zl7IgzE

Assam: Locals stage a protest in Dibrugarh against #CitizenshipAmendmentBill. The Bill was passed in Lok Sabha yesterday. pic.twitter.com/4FlzRJk6U9

Assam: People stage protest in Jorabat against #CitizenshipAmendmentBill which was passed in Lok Sabha, yesterday. pic.twitter.com/gEZjGkvMBE

The Citizenship (Amendment) Bill 2019, which was passed in the Lok Sabha on Monday, seeks to grant Indian citizenship to non-Muslim refugees from Pakistan, Bangladesh, and Afghanistan.  The Bill was introduced after a division with 293 members voting in favour of the bill and 82 against it.

Through this bill, Indian citizenship will be provided to the members of Hindu, Sikh, Buddhist, Jain, Parsi and Christian communities, who have come from the three countries to India till December 31, 2014, to put an end to them being treated as illegal immigrants in the country. Earlier this year. the Bill was passed by the Lower House of the Parliament but lapsed with the term of the previous Lok Sabha during the first term of the Prime Minister Narendra Modi government in the Centre.