Car in RSS Chief Mohan Bhagwat’s Convoy Overturns in Bid to Save Cow, One Injured 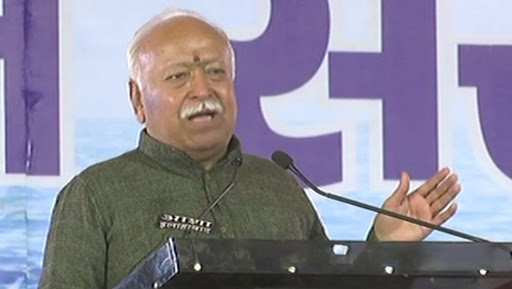 Mumbai, May 16: A vehicle that was part of RSS chief Mohan Bhagwat's convoy overturned in an attempt to save a cow standing in the middle of the road near Warora in Chandrapur district, in which one of his security personnel was injured, police said. Bhagwat, who is a 'Z category' protectee, was traveling from Chandrapur to Nagpur, when the driver of an SUV in his convoy spotted the stationary cow on the road, police said. Ratan Tata Meets Mohan Bhagwat At RSS Headquarters in Nagpur.

"The driver tried to avoid the cow and braked hard, which resulted in a tyre burst and the vehicle toppling over," a senior officer said, adding that the cow was unhurt in the incident that took place at 5.15 pm near Warora on the Chandrapur-Nagpur highway. Bhagwat's car had already passed the cow, but a vehicle in the same convoy coming from behind met with this accident, he said.

"There were six CISF personnel in the SUV, of which one got injured due to the toppling over of the vehicle," an official said, adding the SUV was registered in Uttar Pradesh. Rest of the convoy prcoeeded as per schedule and the injured security official was shifted to Nagpur for treatment, police said.