The combination therapy is co-developed by Tsinghua University, the Third People's Hospital of Shenzhen and Brii Biosciences headquartered in China and the US, Global Times reported. It is also likely to be the first to receive emergency use authorisation in developed countries such as the US. 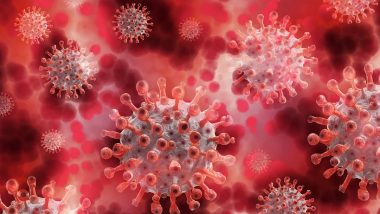 Beijing, November 15: China is set to approve the country's first monoclonal antibody combination therapy against Covid-19 by December, according to media reports. Monoclonal antibodies are proteins designed to attach to a specific target, in this case the spike protein of SARS-CoV-2, which the virus uses to enter human cells.

The combination therapy is co-developed by Tsinghua University, the Third People's Hospital of Shenzhen and Brii Biosciences headquartered in China and the US, Global Times reported. It is also likely to be the first to receive emergency use authorisation in developed countries such as the US. "Human bodies produce a great amount of antibodies, but not all of them have antiviral efficacy. The goal of our research is to pick out the strongest ones that can be used as antibody drugs to treat infected patients," Zhang Linqi, a professor at the School of Medicine at Tsinghua University, was quoted as saying by Science and Technology Daily on Monday.  COVID-19 in China: Beijing Tightens Curbs on Inbound Travel as Coronavirus Cases Surge.

Brii Biosciences had, in late August, announced that its SARS-CoV-2 therapy BRII-196/BRII-198 demonstrated a statistically significant reduction of 78 per cent in the hospitalisation and death in phase III clinical trials conducted in the US, Brazil, South Africa, Mexico, Argentina and the Philippines. It has already been used among more than 700 patients infected in the recent epidemic flare-ups in China, caused by the Delta variant. The therapy has also proven effective against major coronavirus variants, including the Delta, Lambda and MU variants, the Beijing Daily reported.  COVID-19 Origin: Evidence Points to Natural Origin of Coronavirus, Not Chinese Lab-Leak, Say Scientists.

The company last month submitted an application to the National Medical Products Administration and is expected to be approved for marketing by the end of December. The company has invested $100 million to get the drug ready for marketing in China, the US and other countries, Brii Biosciences' Chief Financial Officer announced in September. It has also applied to the US Food and Drug Administration for emergency use authorisation, the report said. Several studies have shown that monoclonal antibody therapy can stop Covid infection's progression to ICU admissions and death. The cocktail therapy shot to fame after it was used to treat former US president Donald Trump last October.

The US-based Regeneron's monoclonal antibodies, casirivimab and imdevimab, and Eli Lilly's drug bamlanivimab are others that have been granted emergency use authorisation in several countries. Several other pharma companies, including South Korea's Celltrion, UK's GlaxoSmithKline, are conducting Phase II or III trials that are underway or forthcoming. Initial evidence from Regeneron and Eli Lilly indicate that these drugs decrease hospitalisations and medical visits, as well as reduce patient viral loads.

(The above story first appeared on LatestLY on Nov 15, 2021 07:10 PM IST. For more news and updates on politics, world, sports, entertainment and lifestyle, log on to our website latestly.com).