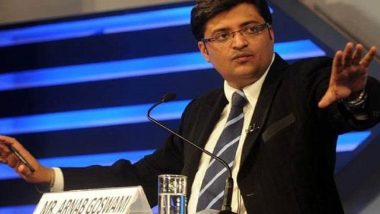 New Delhi, January 20: Upping the ante against the government over journalist Arnab Goswami's purported social media chat leak, the Congress on Wednesday described it as an act of "treason" and demanded an immediate inquiry over leaking of such classified information about the Balakot air strikes. The Congress also said it will raise the issue of the alleged chat leaks in Parliament's Budget session.

Addressing a press conference here at the party headquarters, Antony said, "The contents of the leaked chats between Goswami of Republic TV and the former CEO of BARC is a serious issue for the entire nation."

Antony said that for a very patriotic Indian, it is a shock and a serious matter of concern because it affects national security. The Congress leader said that it effects the security of armed forces, especially in this case, the security of brave air warriors. "And also in the way they (Goswami and BARC CEO) mentioned the martyrdom of 40 CRPF men is all a serious concern for us," Antony said.

He said that the people of the country and the political parties might have differences on several issues but are united when it comes to national security cutting across the religious and party lines to protect the country.

"But now it is very clear that classified documents that too considering the national security and also considering the most sensitive secret air strikes were available with the people who were not expected to know it, and were not authorised to get these documents," Antony said.

He said "I am very sad and shocked" over the leaked chats between Goswami and former BARC CEO Partho Dasgupta and the language they used while mentioning the martyrdom of 40 CRPF troopers. Firing salvos at the government, the Congress leader said, "Three days before the Balakot air strikes, how did one journalist come to know of the details of it? It would have effected the operation and its effectiveness."

Only very few people are expected to be in the know of such secret information, to know the details of the military operations. "Even all the Cabinet ministers are not expected to get that as only a few handful of people and few military people are informed about such operations," he said.

"These documents were leaked to the media, but not the entire media but to only one journalist by the people who were in top positions of the government," he alleged. "Leaking official secrets about the military operation, national security matters, sensitive military operations especially air force strike is treason and anti-national activity," he alleged.

Questioning the silence of the government over the issue, Antony said, "Even till today the government has not said anything on this. I am sure these anti-national activities or leakage of secret military operations was among the four or five civilian people. I don't suspect anybody. But one of them is suspect. It needs to be enquired immediately on a war footing. And whoever is guilty should be punished for treason."

Shinde said that what Goswami has done is not just shameful for the country but also for journalism. "In last several years no media organisation or any journalist has done such act," he said. He said that the country has seen several wars and the governments of different parties, but such an act of leakage of official secrets was never witnessed.

"They were celebrating on Pulwama after our 40 CRPF troopers were killed in a terror attack," the former Home Minister said, referring to the chats of Goswami and Partho Dasgupta. On Tuesday, former Congress chief Rahul Gandhi had also slammed the government and said that leaking sensitive information related to national security to a journalist is a "criminal act" and persons behind this should be put in prison.

(The above story first appeared on LatestLY on Jan 20, 2021 03:48 PM IST. For more news and updates on politics, world, sports, entertainment and lifestyle, log on to our website latestly.com).