Union Finance Minister Nirmala Sitharaman on Thursday announced a relief package of Rs 1,70,000 crore for poor amid the nationwide lockdown imposed in view of the coronavirus outbreak. 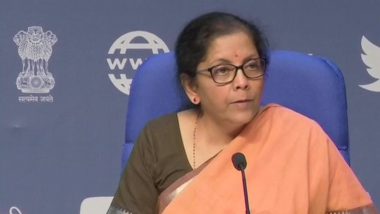 New Delhi, March 26: Union Finance Minister Nirmala Sitharaman on Thursday announced a slew of measures for those affected by the nationwide lockdown imposed in view of the coronavirus outbreak. Addressing a press conference, Nirmala Sitharaman announced a relief package of Rs 1,70,000 crore for poor. Touted as the Pradhan Mantri Garib Kalyan Yojna, the scheme will provide free food and cash to 80 crores people. The Finance Minister expressed her gratitude to ASHA workers, doctors, sanitary workers, para-medics for being in the front-line in the battle against the coronavirus. She announced an insurance cover for them of Rs 50 lakh per person. Coronavirus Outbreak Live News Updates on March 26.

For the poor, Sitharaman announced 5 kg of rice or wheat and 1 kg of preferred pulses for free every month for the next three months. "No one will go hungry," she asserted. The Finance Minister further announced that 8.69 crore farmers will be immediately benefited through direct cash transfers. "Rs 2,000 will be transferred to immediately in the first week of April to farmers," she said.

Sitharaman announced that the government is hiking MNREGA wage to Rs 202 per day from Rs 182 which will benefit 5 crore families. Women who have Jan Dhan accounts will receive Rs 500 for the next three months so that they can take care of their households, Sitharaman said. Announcing another relief for women, the Finance Minister announced free cylinders for the next 3 months under the Ujjwala Scheme. Insurance Cover of Rs 50 Lakh Each Announced For Doctors, Nurses, Sanitation Workers, Paramedics And All Other Staff Working on The Frontline Amid Coronavirus Outbreak, 20 Lakh Workers to Receive The Benefit.

In a bid to help self-help women groups, Sitharaman announced the National Rural Livelihood Mission scheme under which collateral loans will be doubled to Rs 20 lakh for women. She also made a number of announcements for workers in the organised sectors. "The government will pay the EPF contribution for both employer and employee for the next 3 months," she announced.

This will apply to establishments with upto 100 employees where 90 per cent earn less than Rs 15,000 per month. Sitharaman said the government will PF scheme regulations to allow employees to draw non-refundable advance of 75 percent of the amount standing to credit or 3 months wages, whichever is lower. For construction workers, the Finance Minister said the government will utilise workers' welfare fund of Rs 31,000 crore.

"We will also request state governments to utilise district mineral funds for coronavirus testing and medicines," Sitharaman said. "These announcements will be implemented immediately," she responded in response to a question.

(The above story first appeared on LatestLY on Mar 26, 2020 02:15 PM IST. For more news and updates on politics, world, sports, entertainment and lifestyle, log on to our website latestly.com).