Coronavirus Outbreak in India: Karnataka School Students With Cold, Fever to Be Given Holiday

"A Telangana techie tested positive for coronavirus in Hyderabad," said Karnataka Health Minister Sriramulu on Tuesday at an emergency meeting at the Vidhan Souda, referring to the employee who works in the city. In January, the software engineer interacted with people from Hong Kong in Dubai and returned to Bengaluru around February 20. 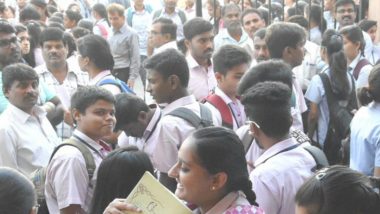 Bengaluru, March 3: The Karnataka government has directed school authorities to grant leave to students and staff suffering from cold or fever in the light of renewed coronavirus (COVID -19) fears. "If any student, teacher of staff is suffering from respiratory infections, they should be granted leave. They should be allowed to come back to school only after confirming from the doctor that they are cured. In case of a student or staff staying at hostels developing any symptoms, they should be kept in a separate room," said the government circular.

Meanwhile, the state health department is on high alert after a techie working in the city tested positive for coronavirus in Hyderabad. "A Telangana techie tested positive for coronavirus in Hyderabad," said Karnataka Health Minister Sriramulu on Tuesday at an emergency meeting at the Vidhan Souda, referring to the employee who works in the city. In January, the software engineer interacted with people from Hong Kong in Dubai and returned to Bengaluru around February 20. Coronavirus Scare in Delhi-NCR: Two Noida Schools Shut Fearing Infection After COVID-19 Patient Hosts Birthday Party for Students.

Suspected of contracting the virus in Dubai, the health officials are monitoring his colleagues and people in touch with him in the city. "Blood samples of 25 people working with the techie have been collected," said Sudhakar, a Karnataka health official. Later, the techie travelled to Hyderabad on a bus from Bengaluru, prompting authorities to trace and collect the blood samples of 23 fellow passengers in the bus.

Aiming at containing the spread of coronavirus, Sriramulu said, "We have formed 1,680 isolation wards in private hospitals. Chief Minister B.S. Yediyurappa has apprised Prime Minister Narendra Modi and Union Health Minister of the situation." However, the Health Minister said no positive case has been recorded till now in the state.

"Tests are also being conducting on passengers arriving in Karnataka and all precautionary measures are being taken," said Sriramulu about the 40,000 people thermal screened at the Kempegowda International Airport (KIA) in the city. Major private hospitals in the city have geared up to treat suspected cases.

Five Karnataka districts bordering Kerala -- Dakshina Kannada, Kodagu, Udupi, Chamarajanagar and Mysuru -- continue to be under surveillance after three positive coronavirus cases were reported in Kerala. Currently, the Karnataka Health and Family Welfare Services department is observing 284 people under home isolation across the state for coronavirus symptoms. The deadly virus has killed a total of 2,912 people in mainland China till Saturday, bringing the global death toll to more than 3,000, authorities said on Monday.

(The above story first appeared on LatestLY on Mar 03, 2020 04:48 PM IST. For more news and updates on politics, world, sports, entertainment and lifestyle, log on to our website latestly.com).