The Ministry of Defence said that on the occasion, a new website for the Armed Forces Flag Day Fund (AFFDF) will be launched by the Defence Minister. 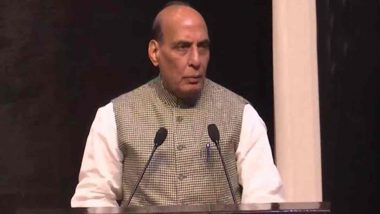 New Delhi, November 28:  The fourth edition of the Armed Forces Flag Day Corporate Social Responsibility (CSR) Conclave is being organised by the Department of Ex-Servicemen Welfare, Ministry of Defence (MoD) in New Delhi on Tuesday.

Defence Minister Rajnath Singh will be the Chief Guest at the event. The event aims at highlighting the measures taken by the Department of Ex-Servicemen Welfare towards rehabilitation, resettlement and welfare of the veterans, widows and their dependents and mobilising the CSR support towards these efforts, the Defence Ministry official informed. India-France Annual Defence Dialogue 2022: Rajnath Singh To Co-Chair Meeting With French Republic Minister Sebastien Lecornu on November 26-28.

The Ministry of Defence said that on the occasion, a new website for the Armed Forces Flag Day Fund (AFFDF) will be launched by the Defence Minister. Indo-Pacific Regional Dialogue 2022: Rajnath Singh Says 'India Doesn’t Believe in World Order Where Few Are Considered Superior to Others'.

The new website is an interactive and user-friendly portal developed to promote online contribution to AFFDF. Rajnath Singh will also release the anthem for this year's promotional campaign for the Armed Forces Flag Day and felicitate the prominent CSR contributors to the Fund. Corporate contributions to Armed Forces Flag Day Fund are eligible for fulfilling the CSR obligation under section 135 of Companies Act, 2013.

Minister of state of the Defence Ministry Ajay Bhatt, Chief of Defence Staff General Anil Chauhan, Defence Secretary Giridhar Aramane and other senior officials of the MoD will also be in attendance. The members from the CSR fraternity, veterans and the defence services will attend the conclave.

(The above story first appeared on LatestLY on Nov 28, 2022 03:38 PM IST. For more news and updates on politics, world, sports, entertainment and lifestyle, log on to our website latestly.com).