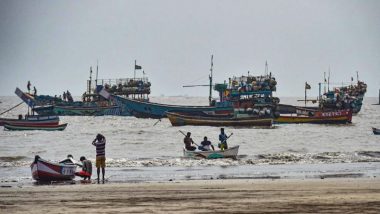 Mumbai, Jun 3: At least 10 sailors were rescued from a ship, which was stranded off the coast of Ratnagiri in Maharashtra due to high tide and heavy rains in the wake of cyclonic storm Nisarga on Wednesday, an official said.

The vessel with a crew of 10 was spotted from the Mirya Bunder area of Ratnagiri and efforts were made to bring it to the coast, the official said. However, the high tide coupled with heavy rains and rough winds pushed the ship towards the coast of Mirakwada, where the sailors were rescued safely, he said. Follow Cyclone Nisarga Live Tracker And News Updates.

Heavy rains pounded Ratnagiri as Cyclone Nisarga made its landfall on Wednesday. Roofs of several buildings in Ratnagiri, including a bank in Dapoli, were blown away by the rough winds, the official added.