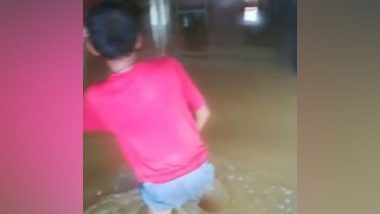 Chittoor, November 26: Scores of houses in Chittoor district's Vadamalapeta Mandal were waterlogged on Thursday due to the heavy rainfall caused by cyclone Nivar. Due to the heavy rainfall, people are facing several problems as water entered into their households. Heavy rain affected several areas in Chittoor district including Erpedu, Srikalahasti, Satyavedu, and Renigunta.

Andhra Pradesh Disaster Management Commissioner K Kannababu said that there is no loss of life so far in the state due to cyclone Nivar. Cyclone Nivar: Death Toll Surges to 5 in Tamil Nadu, Electricity Supply Remains Disrupted.

"The situation is fully under control and district collectors are on the alert to face any situation. 7,772 people have been evacuated in various places of AP, and 111 relief camps are being organized, especially in Nellore, Chittoor and some parts of Kadapa and Prakasam districts," he added.

"5 SDRF and 4 NDR teams are deployed and some teams are kept in standby. Today we are expecting extremely heavy and heavy rainfall in almost 200 Mandals. At the time of landfall, Nellore district is most affected. Now as it entered AP, Chittoor Kadapa and Anantapur districts are getting affected. Prakasam and Kurnool districts also will have some effect," he added.