Cyclone Nivar is expected to make a landfall between Mahabalipuram in Tamil Nadu and Karaikal in Puducherry today. The 'very super cyclonic storm' is expected to bring in heavy to extremely heavy rains in southern states of India during the landfall. 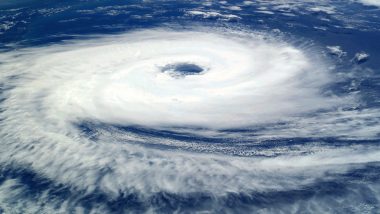 S Balachandran, the deputy director-general of the regional meteorological centre, Chennai, told news agency ANI that the cyclonic storm is likely to cross between Karaikal and Mahabalipuram by November 25 afternoon. The Depression is very likely to move northwestwards and cross Tamil Nadu and Puducherry coasts between Karaikal and Mamallapuram around November 25 afternoon as a severe cyclonic storm with a wind speed of 100-110 kmph gusting to 120 kmph. Cyclone Gati Weakens Into Cyclonic Storm, Cyclone Nivar Brewing Over Bay of Bengal Expected to Make Landfall Between Mahabalipuram and Karaikal on November 25.

at 0830 IST of today.Very likely to intensify into a CS during next 24 hrs and cross TamilNadu and Puducherry coasts between Karaikal and Mamallapuram around 25th Nov 2020 afternoon as SCS. pic.twitter.com/VI0z09k0HM

According to the India Meteorological Department (IMD), the depression over Bay of Bengal about 600 km south-southeast of Puducherry and 630 km south-southeast of Chennai. It is very likely to intensify into a cyclonic storm during next 24 hours.  The rainfall activity is likely to increase over south peninsular India from today onwards with rainfall/thunderstorm activity over Tamil Nadu, Puducherry and Karaikal during November 24 to 26 and over south Coastal Andhra Pradesh, Rayalseema and Telangana during November 25 to 26, 2020.

Meanwhile, extremely heavy rainfall activity also very likely over Tamil Nadu and Puducherry during November 24 and 25 and over south Coastal Andhra Pradesh and Rayalseema on November 25 and 26 and over Telangana on November 26, 2020.

(The above story first appeared on LatestLY on Nov 25, 2020 12:07 PM IST. For more news and updates on politics, world, sports, entertainment and lifestyle, log on to our website latestly.com).