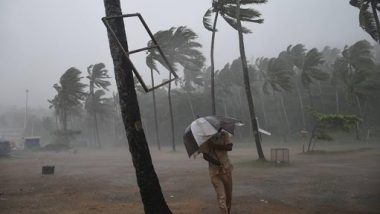 Mumbai, May 17: Cyclone Tauktae, which was moving towards Gujarat from Maharashtra as a 'very severe cyclonic storm' has now intensified into an 'extremely severe cyclonic storm', the India Meteorological Department (IMD) said. The Tropical Cyclone Tauktae, pronounced as Tau’Te, which was over eastcentral Arabian Sea, has now moved north-northwestwards with a speed of about 20 kmph during the past 06 hours. Cyclone Tauktae Live Tracker Map on Windy: Tropical Cyclonic Storm Likely to Hit Coasts of Maharashtra and Gujarat; Check Realtime Status Here.

Cyclone Tauktae will then cross Gujarat coast between Porbandar and Mahuva in Bhavnagar district during the night (2000-2300 hrs IST) of May 17 as a Very Severe Cyclonic Storm with a maximum sustained wind speed 155-165 kmph gusting to 185 kmph. Cyclone Tauktae Update: Maharashtra Braces for Tropical Cyclone Fury, Temporary Shelters Put Up in Mumbai; Navy on Standby.

In view of the threat posed by Cyclone Tauktae, thousands of people were evacuated from low-lying areas along its western coast as a powerful Cyclone Tauktae is expected to make landfall in Gujarat. IMD DG Mrutyunjay Mohapatra informed that cyclone Tauktae is very likely to cross the Gujarat coast between Porbandar and Mahuva in Bhavnagar district around the early morning of May 18.Cyclone Tauktae Day-Wise Forecast: Cyclonic Storm To Cross Gujarat Coast on May 18; Check Cyclone Path, Wind Speed and Intensity.

Meanwhile, the Indian Air Force (IAF) had deployed 5xC-130 and 3xAn-32 aircraft for the transportation of NDRF personnel and Humanitarian Aid and Disaster Relief (HADR) equipment from Pune, Kolkata and Vijaywada to Ahmedabad yesterday. On Sunday, Home Minister Amit Shah chaired a review meeting with the Chief Ministers of Gujarat, Maharashtra and Administrator of Daman and Diu and Dadra Nagar Haveli to assess the preparedness of States and Central ministries to deal with the situation arising out of Cyclone Tauktae.

(The above story first appeared on LatestLY on May 17, 2021 10:29 AM IST. For more news and updates on politics, world, sports, entertainment and lifestyle, log on to our website latestly.com).