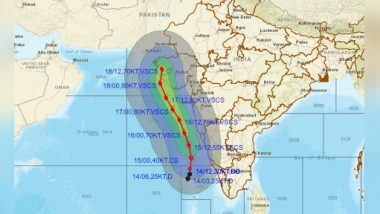 New Delhi, May 15: Cyclone Tauktae, pronounced as Tau’Te, turned into a 'Cyclonic Storm' on Saturday, May 15, and intensified into a 'Severe Cyclonic Storm'  over east central Arabian Sea on Saturday. It will further intensify into a 'Very Severe Cyclonic Storm' during the next six hours with wind speed up to 175 kmph. The cyclonic activity would bring heavy rainfall along with thunderstorms, strong and gusty winds in Kerala, Tamil Nadu, Maharashtra, Goa and Gujarat. The cyclonic storm is very likely to move north-northwestwards and cross the Gujarat coast between Porbandar and Naliya on May 18. Cyclone Tauktae Live Tracker Map on Windy: Cyclonic Storm Likely to Hit Coasts of Gujarat, Maharashtra and Kerala in Next 4 Days, Check Realtime Status Here.

The name of the cyclone, 'Tauktae', has been given by Myanmar which means 'gecko', a highly vocal lizard. This is going to be the first cyclonic storm of 2021 along the Indian coast. The cyclonic storm is very likely to move north-northwestwards and cross the Gujarat coast between Porbandar and Naliya around the afternoon or evening of May 18. "It is very likely to intensify further into a Severe Cyclonic Storm during next 6 hours and into a Very Severe Cyclonic Storm during the subsequent 12 hours", the IMD said. Here's What Cyclone Tauktae Means and How to Pronounce the Name. 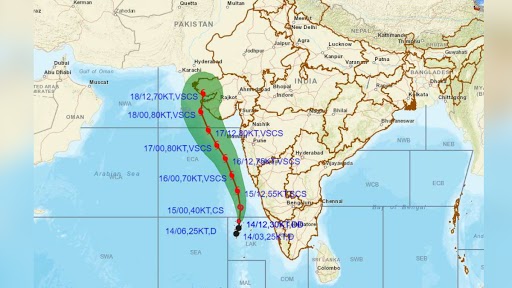 The IMD said that tidal wave of about 2- 3 m above astronomical tide is likely to inundate coastal areas of Morbi, Kutch, Devbhoomi Dwarka & Jamnagar districts and 1-2 meters along Porbandar, Junagarh, Gir Somnath, Amreli, Bhavnagar and 0.5 to 1m over the remaining coastal districts of Gujarat during the time of landfall of the system.

(The above story first appeared on LatestLY on May 15, 2021 04:52 PM IST. For more news and updates on politics, world, sports, entertainment and lifestyle, log on to our website latestly.com).