There is a decline in job creation in the current fiscal under some of the flagship employment generation and placement schemes of the Modi government, according to data tabled in Parliament. 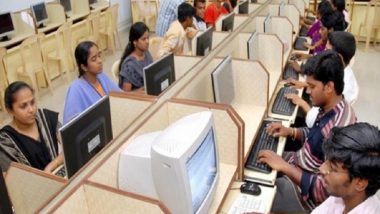 New Delhi, February 19: There is a decline in job creation in the current fiscal under some of the flagship employment generation and placement schemes of the Modi government, according to data tabled in Parliament. The number of beneficiaries under PM’s Employment Generation Programme and placements of skilled workers under Deendayal Antyodaya Yojana-National Urban Livelihoods Mission went down in 2019-20 (until December 31, 2019). Job Loss: Employment in India Declines by 9 Million Between 2011 and 2018, Finds Study.

According to data provided by the Ministry of Labour and Employment, the number of jobs generated under PMEGP dropped to 2.57 lakh in 2019-20 (until December 31, 2019) from 5.87 lakh in 2018-19. The current number of jobs generated under the PMEPG the lowest since the Modi government assumed office in 2014. In 2015-16, 3.23 lakh jobs were generated under the programme. The number increased to 4 lakh in the next fiscal. Unemployment Rate Among Educated Persons Jumps to 11.4%: Labour Minister Santosh Gangwar Tells Lok Sabha.

According to data until January 27, 2020, there was a sharp decline in the placement of people skilled under the DAY-NULM. Placements dropped from 1.78 lakh in 2018-19 to 44,066 in the current fiscal, Times of India reported. With the DAY-NULM, the government aims to reduce poverty by providing self-employment and skilled wage employment opportunities to the urban poor.

Prime Minister Narendra Modi's home state Gujarat saw the steepest decline in placements under DAY-NULM - from 13,213 in 2018-19 to 2,727 until January 27, 2020. The number of beneficiaries of Deen Dayal Upadhyaya Grameen Kaushalya Yojana also declined. The number of people getting training fell from 2.4 lakh to 1.74 lakh, and the number getting jobs declined from 1.35 lakh in 2018-19 to 1.10 lakh this year.

(The above story first appeared on LatestLY on Feb 19, 2020 10:07 AM IST. For more news and updates on politics, world, sports, entertainment and lifestyle, log on to our website latestly.com).