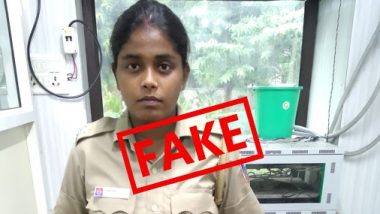 New Delhi, August 14: In a bizarre incident, a woman in Delhi, who impersonated as an Assistant sub-inspector (ASI), was caught by Police for issuing fake challans to people violating COVID-19 norms. According to a tweet by the official Twitter handle of DCP West Delhi, the woman who posed as assistant sub-inspector was identified as Tamanna Jahan, a 20-year-old from west Delhi's Tilak Nagar area. Reports inform that after interrogation, the woman was found to be a resident of Nangloi in outer Delhi. She was not employed and hence resorted to issue fake challans to make easy money.

The Police managed to nab Jahan on Wednesday, when Head Constable Sumer Singh was patrolling the area. He noticed Jahan in Tilak Nagar stopping people for not wearing masks and issuing challans. After being suspicious about her actions, Singh asked another constable to come in plain clothes and help him bust the fake act. When the other constable went up to her without wearing a mask, she stopped him and asked him to pay a fine, police said.

A fake challan book, Rs 800 and police uniform was recovered from her and a case has been registered against her under relevant sections of the Indian Penal Code. According to reports, the woman confessed to the crime and told cops that  due to her poor financial condition, she posed as a police officer and issued fake challans to make money.

(The above story first appeared on LatestLY on Aug 14, 2020 04:40 PM IST. For more news and updates on politics, world, sports, entertainment and lifestyle, log on to our website latestly.com).