According to the official website of Indian Oil Corporation, the retail pump price of petrol was Rs 81.40 per litre in Mumbai, Rs 75.81 per litre in Delhi, Rs 78.39 per litre in Kolkata and Rs 78.77 per litre in Chennai on Thursday. 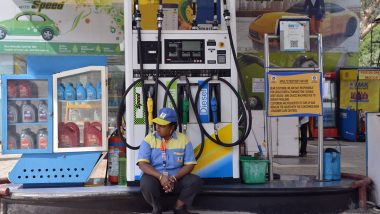 The prices of petrol and diesel remained stable on January 8 after a continuous rise for six days in the new year. According to reports, taking into consideration the rise in the price of crude oil in the international market, there is no hope of getting relief on the fuel prices in the coming days. Fuel Price Hike: Twitterati Voice Displeasure as Petrol Prices Hover Around Rs 75 Per Litre.

The developing US-Iran geopolitical tensions has aconsequential impact on the oil prices. According to Petroleum Minister Dharmendra Pradhan, India as a major consumer of crude oil is keeping a tab on the situation which has developed as the US-Iran crisis deepened on Wednesday.

Domestic petrol and diesel prices are reviewed by oil marketing companies on a daily basis. Since June 2017, fuel prices in India are revised daily at 06:00 am every day. Before this prices were revised every fortnight. Several factors that closely impact the price of fuel include rupee to US dollar exchange rate, cost of crude oil, global cues and international crude oil prices gain.

(The above story first appeared on LatestLY on Jan 09, 2020 12:02 PM IST. For more news and updates on politics, world, sports, entertainment and lifestyle, log on to our website latestly.com).