'Gautam Buddha Was Born in Lumbini': Nepal Rejects Jaishankar's Mention of The Spiritual Figure as an Indian 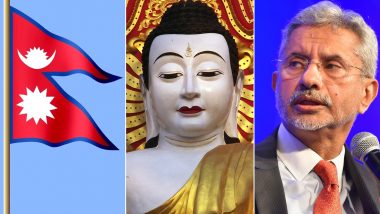 New Delhi/Kathmandu, August 9: Nepal on Sunday rejected India's External Affairs Minister S Jaishankar's mention of Gautam Buddha as an Indian. During a virtual event titled "India@75 Summit: Collaborating for a New Self-reliant India," on Saturday, Jaishankar mentioned Gautam Budha as an Indian. "Who are the greatest Indians ever that you can remember?" Jaishanker asked, adding, "I would say one is Gautam Buddha and the other is Mahatma Gandhi." Interesting Facts And Teachings of Lord Buddha.

In a statement, Singh Durbar, spokesperson of Nepal's Ministry of Foreign Affairs rejected Jaishknar's remark and said: "It is a well-established and undeniable fact proven by historical and archaeological evidence that Gautam Buddha was born in Lumbini, Nepal. Lumbini, the Birthplace of Buddha and the fountain of Buddhism, is one of the UNESCO world heritage sites." The spokesperson even quoted India's Prime Minister Narendra Modi to assert that Gautam Buddha was a Nepali.

"During his visit to Nepal in 2014, Prime Minister of India Narendra Modi himself, while addressing Nepal's Legislature Parliament, had said that 'Nepal is the country where the apostle of peace in the world, Buddha, was born'," Durbar pointed out. "It is true that Buddhism spread from Nepal to other parts of the world in the subsequent period. The matter remains beyond doubt and controversy and thus cannot be a subject of debate. The entire international community is aware of this," he added.

Following Nepal's Foreign Ministry's statement, India's Ministry of External Affairs also issued a clarification. The clarification read: "External Affairs Minister’s remarks yesterday at the CII event referred to our shared Buddhist heritage. There is no doubt that Gautam Buddha was born in Lumbini, which is in Nepal."

Recently, a controversy broke out when Nepal's Prime Minister KP Sharma Oli claimed that the "real" Ayodhya lies in Nepal, not in India and that Lord Ram was born in Thori in southern Nepal. Speaking at an event on the birth anniversary of Nepalese poet Bhanubhakta at the Prime Minister's residence in Kathmandu, Oli said that Nepal "has become a victim of cultural encroachment and its history has been manipulated."

Bhanubhakta was born in 1814 in Tanhu of western Nepal and is credited for translating Valmiki's Ramayan into the Nepali language. He died in 1868. "Although the real Ayodhya lies at Thori in the west of Birgunj, India has claimed the Indian site as the birthplace of Lord Ram,” Oli said.

(The above story first appeared on LatestLY on Aug 09, 2020 06:14 PM IST. For more news and updates on politics, world, sports, entertainment and lifestyle, log on to our website latestly.com).