The commuters of Delhi metro are now provided free wifi facility at all the metro stations on the yellow line. The facility is available on 37 stations on the HUDA City Centre-Samaypur Badli line. 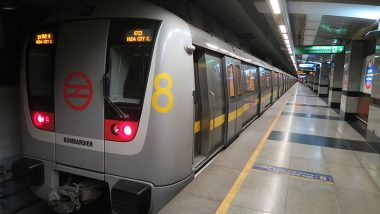 New Delhi, October 18: Here is a good news for the commuters of Yellow line of the Delhi Metro. The DMRC had announced free high-speed wifi facility at all metro stations on HUDA City Centre to Samaypur Badli metro line from Sunday, October 17. People can easily access this free facility and make use of it for standard internet application such as e-mail, audio, video calls , online searches and for using social media platforms including Facebook, WhatsApp, among others. Delhi Metro Replies With DDLJ Meme to Man Wanting to See His Girlfriend on Weekend, Response Goes Viral.

The facility is now available on 37 metro stations. According to the press release by the Delhi Metro Rail Corporation in this regard, "More than 330 access points have been installed at these 37 stations to provide uninterpreted internet access to the commuters." Most of these metro stations are underground and cover outer Delhi, north Delhi through central Delhi and south Delhi till Gurugram. Monkey Takes Ride With Passenger in Delhi Metro, Video Goes Viral.

(The above story first appeared on LatestLY on Oct 18, 2021 12:27 PM IST. For more news and updates on politics, world, sports, entertainment and lifestyle, log on to our website latestly.com).