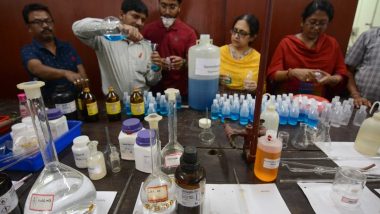 New Delhi, July 15: The Central Board of Indirect Taxes and Customs, Under the Union Finance Ministry, on Wednesday clarified its stance on the imposition of 18 per cent Goods and Services Tax on hand sanitisers. The Union Ministry stated that lowering the GST rates would not benefit consumers if domestic manufacturing suffers on account of inverted duty structure and is against the nation’s policy on ‘Atmanirbhar Bharat’.

Apart from this, the CBIC said, "Lower GST rates help imports by making them cheaper. This is against the nation’s policy on ‘Atmanirbhar Bharat’. Consumers would also eventually not benefit from the lower GST rate if domestic manufacturing suffers on account of inverted duty structure."

Among other things, the Union Ministry said that the GST rates on various items are decided by the GST Council where the Central Government and all the state governments together deliberate and take decisions. The Ministry came with the clarification after several media house reported and raised concerns on 18 per cent GST rate on alcohol-based hand sanitizers.

(The above story first appeared on LatestLY on Jul 15, 2020 06:06 PM IST. For more news and updates on politics, world, sports, entertainment and lifestyle, log on to our website latestly.com).