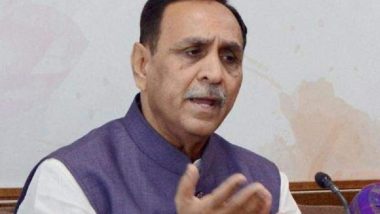 New Delhi, June 5: The Gujarat government has announced that the Gujarat Freedom of Religion (Amendment) Bill, 2021, or the Anti Love Jihad law will come into force from June 15. The Bill was passed by the state legislative assembly in the recently concluded Budget Session.

According to the Gujarat government, the law seeks to curb the forced conversions and the religious conversions aimed for the purpose of marriage specifically. The bill amended a 2003 law, which penalises religious conversion through coercion or allurement. Gujarat Man Creates Fake Facebook Profile Impersonating Amreli SP Nirlipt Rai For Gaining 'Likes'; Arrested.

TOI reported that earlier when the Bill was passed in the state assembly, minister of state for home and law Pradipsinh Jadeja had said, 'The Gujarat Freedom of Religion Act seeks to deal with religious conversion through allurement, force or by misrepresentation or by any other fraudulent means. Hindu girls have been lured by ‘vidharmi’ boys with fake Hindu names and thereafter forcefully converted to other religions.' Gujarat: Tea Vendor Gets 18 Months in Jail for Hurling Sandals at High Court Judge in 2012.

According to the new amendment, forcible 'conversion by marriage, or by getting a person married, or by aiding a person to get married' shall invite imprisonment of three to five years and up to Rs 2 lakh fine. If the victim is a minor, a woman, a Dalit, or a tribal, then the offenders may be punished for a jail term of four to seven years and a fine no less than Rs 3 lakh.

(The above story first appeared on LatestLY on Jun 05, 2021 06:21 PM IST. For more news and updates on politics, world, sports, entertainment and lifestyle, log on to our website latestly.com).