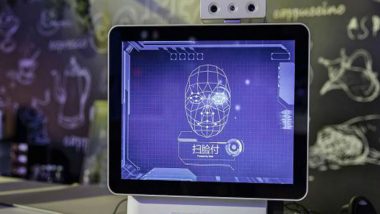 "Vadodara City Police will be first in the state to use FRS. Under the initiative, we are using our CCTV network and database of absconders, missing kids, and criminals who haven't been arrested to find them," said the DCP Chaudhary said the already existing database of criminals and missing people has been uploaded in the system and whenever those people come under the vision of the police's CCTV network, they will get an alert about the exact location of the persons. Facial Recognition at Protests: Social Media Not Being Used For Matching Face Data, Say Delhi Police.

"We tested the initiative recently in two to three different scenarios. We have tested it with live CCTV feed as well. We uploaded photographs of some suspects in the database and the moment they came under any CCTV in our network, we got the exact location and alerted officers on the field immediately," he said.

Chaudhary said currently Vadodara has a network of 700 CCTV cameras, and the police department is working on adding 407 more cameras to their network.

"Recently, the city administration has approved one more proposal under which around 500 more CCTV cameras will be added to the city's network, and with that, the city's CCTV network will reach 1,550-1,650 cameras. With this we'll keep a sharp eye on all the crowded places and borders of the city," he said.