Although Gurmeet Ram Rahim Singh's birthday has passed, his followers have continued sending greeting cards via post. They are also sending Rakhis ahead of Rakhsha Bandhan on August 22. 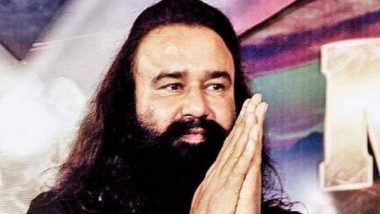 Ram Rahim is currently lodged in Sunaria jail in Rohtak district of Haryana. His followers have flooded a local post office under Hisar postal division of Haryana with greetings card and Rakhis for him, according to a report by News18. As many as 25,000 parcels have arrived for the jailed Dera Sacha Sauda chief, the report added. Ram Rahim's birthday falls in August, hence, the entire month is observed as Avatar month by his followers. Honeypreet's Attendant Card To Meet Gurmeet Ram Rahim Cancelled After Objection By Rohtak Police.

"Dera devotees are seen standing in queues with white- and khaki-colored envelopes in their hands. From here, devotees from many villages of the area were sending congratulatory messages on the 54th birthday of the Dera chief lodged in Sunaria jail," Ramesh Kumar, Chief Post Master, Sub Post Office Sidhani, was quoted as saying.

In order to deliver Rakhis ahead of Raksha Bandhan, a special delivery service has been started from August 15. Anticipating an influx of Rakhi parcels, a total of 850 postmen and 2,190 Gramin Dak Sevaks are working. One of the followers of Ram Rahim told News18 that he sends greeting card and Rakhi every year to the jailed Dera chief.

The self-styled godman was sentenced to 20 years in jail in August 2017 for raping two women. A special CBI court in Panchkula in January 2019 also sentenced him and three others to life imprisonment for the murder of a journalist over 16 years ago.

(The above story first appeared on LatestLY on Aug 20, 2021 03:30 PM IST. For more news and updates on politics, world, sports, entertainment and lifestyle, log on to our website latestly.com).