Haryana: IG Hemant Kalson Booked And Arrested For Misbehaving With 2 Women in Panchkula

The Haryana Police on Friday evening arrested Inspector General (IG) of Police Hemant Kalson for allegedly assaulting two women after trespassing into their houses at Panchkula's Pinjore. The incident took place at Rattpur Colony of Pinjore town of Panchkula. 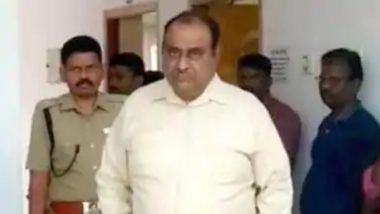 According to various reports, two FIRs have been registered against Kalson. The first FIR has been booked under Sections 323 and 452 of the IPC, while the second FIR was lodged under Sections 323, 452, 509 and 510 of the IPC. Bihar Shocker: 50-Year-Old Woman Gangraped in Patna; Video of Heinous Crime Goes Viral.

Haryana: Inspector General (IG) of Police, Hemant Kalson, has been booked and arrested for allegedly misbehaving with two women after trespassing into their houses at Pinjore in Panchkula yesterday night, says Panchkula Police

As per the first complaint, the woman had alleged that Kalson forcibly entered her house on Friday evening and started beating up her daughter. The woman said she was taking a bath at that time. When she tried to save her daughter, Kalson allegedly bragged that he was (CM ML) Khattar’s man and nobody could touch him.

(The above story first appeared on LatestLY on Aug 22, 2020 05:44 PM IST. For more news and updates on politics, world, sports, entertainment and lifestyle, log on to our website latestly.com).