According to reports, as many as 35 people including 23 soldiers and 12 civilians were pulled out from the rubbles by the National Disaster Response Force (NDRF), the Army and the state police. The dead included building owner's wife Archana. 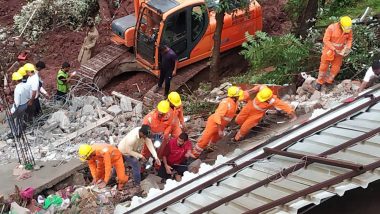 Solan, July 15: Death toll in the four-storey building collapse in Himachal  Pradesh's Solan jumped to 14 on Monday. Out of the 14 killed in the mishap, 13 are Army personnel while one is a civilian. All the trapped people were pulled out in a joint operation by the National Disaster Response Force (NDRF), the Army and the state police. According to a tweet by ANI, 42 people including 30 Army personnel and 12 civilians were trapped in the debris.

On Sunday, a four-storey building collapsed at Kumarhatti collapsed due to incessant rains in the area. According to reports, as many as 35 people including 23 soldiers and 12 civilians were pulled out from the rubbles by a joint team of the NDRF, Army and the state police since Sunday night. Among the deceased, one is the building owner's wife Archana. Solan Deputy Commissioner KC Chaman informed that an FIR has been lodged against the owner of the building. The rescue operations are underway for over 16 hours now.  Continuous rainfall in the area hampered the rescue operation, officials informed.

According to  officials, the incident took place when soldiers, belonging to the Assam Rifles of nearby Dagshai Cantonment, were having their party at a roadside eatery-cum-residential complex which caved in due to heavy rain. However, locals in Solan blamed unscientific construction methods and violations in the granting of construction-sanction for the building collapse.

According to a report by IANS, Himachal Pradesh Chief Minister Jai Ram Thakur has ordered a probe into the incident. He said soldiers and civilians were present in the building, located on the Kumarhatti-Nahan road, around 55 kms from Shimla. "It is very unfortunate. Rescue operation was started immediately. Orders have been given to investigate the cause of the collapse. As per info received till now, the building structure was not as per specifications", Thakur said.

(The above story first appeared on LatestLY on Jul 15, 2019 08:27 AM IST. For more news and updates on politics, world, sports, entertainment and lifestyle, log on to our website latestly.com).