"A 12-feet tall Shivling has been found in the well of Gyanvapi mosque. This is a good omen for Hindus. The survey has established that Gyanvapi houses a Shiv temple, not a mosque," he said. 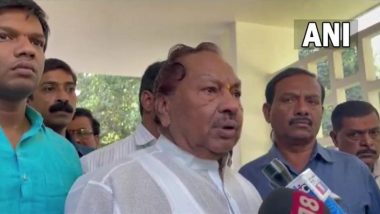 Shivamogga, May 17: Senior BJP leader and former Karnataka minister, K.S. Eshwarappa, on Tuesday said that "Hindus have already taken custody of Ayodhya. Now, Kashi has been taken into custody and Mathura will be taken into control tomorrow." Eshwarappa stated that Ayodhya, Kashi and Mathura are centres of Hindu pilgrimage. "The Muslims have just constructed their mosques," he added.

"A 12-feet tall Shivling has been found in the well of Gyanvapi mosque. This is a good omen for Hindus. The survey has established that Gyanvapi houses a Shiv temple, not a mosque," he said.

"Aurangzeb had destroyed the temple 350 years ago and constructed the mosque. After 110 years Ahalya Bai had constructed a Shiv temple again. I request all not to become the descendants of Aurangzeb but of Ahalya Bai," he said. Gyanvapi Mosque Row: Commission Seeks 2-day Time to Submit Survey Report Before Court.

"On the one hand, a Shivling is found in Gyanvapi and at the same time, anti-national AIMIM MP Owaisi will pray before the grave of Aurangzeb. Why shouldn't we call him an anti-national?" Eshwarappa maintained.

"Anti-nationals in the Congress party have not learnt their lessons yet. No one from the party is talking about Hindu pilgrimage centres. There is no place for such people. But, being peaceful is not the weakness of Hindus," he said.

He defended the air gun training given to Bajrang Dal recruits in Madikeri district. "It is clarified: the training has been given with rubber bullets, no weapons distributed. Shouldn't we learn self-defence tactics for our safety?" he asked.

(The above story first appeared on LatestLY on May 17, 2022 06:44 PM IST. For more news and updates on politics, world, sports, entertainment and lifestyle, log on to our website latestly.com).