As the survey was completed, the Hindu petitioner in the case, Sohan Lal Arya on Monday claimed that the committee found a Shivling at the complex. Arya, who accompanied the court commission for the mosque survey, said that they have found "conclusive evidence". 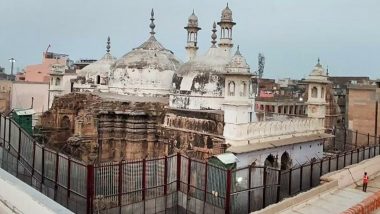 Earlier on Tuesday, Ajay Pratap Singh had said, "The survey lasted for three days from May 14-16. Only 50 per cent report is ready, not complete yet. This is why we will not be able to produce it before the court today. We will seek 3-4 days' time from court."

Further, Special Commissioner Advocate Vishal Singh, who earlier claimed that the report would be submitted in time, has now sought a minimum of two days to prepare a Commission report on the matter. The three-day-long court-monitored videography survey of the Kashi Vishwanath Temple-Gyanvapi Mosque complex in Varanasi concluded on Monday. Gyanvapi Masjid Survey: All Eyes on Supreme Court Hearing Day After Shivling Was Found.

As the survey was completed, the Hindu petitioner in the case, Sohan Lal Arya on Monday claimed that the committee found a Shivling at the complex. Arya, who accompanied the court commission for the mosque survey, said that they have found "conclusive evidence".

The Supreme Court will be hearing the plea seeking a stay on the survey of the Gyanvapi Mosque complex in Varanasi today. The SC bench, headed by Justice DY Chandrachud, will hear the plea of the Anjuman Intezamia Masajid Committee on Tuesday. The survey was conducted in accordance with the Varanasi Civil Court's order to continue the survey despite objections from the mosque authorities.

Further, the President of the Hindu Sena, Vishnu Gupta on Tuesday filed an intervention application seeking directions for dismissal of the petition filed by Anjuman Intezamia Masjid Management Committee challenging the videographic survey of the Gyanvapi Mosque complex, which was adjacent to the famous Kashi Vishwanath Temple in Varanasi.

After the conclusion of the survey, the Varanasi court ordered the District Magistrate of Varanasi, Kaushal Raj Sharma, "to seal the area where the Shivling was found and to bar people from going to the place."

In its order, the court said that the DM, police commissioner and the Central Reserve Police Force (CRPF) commandant Varanasi will be responsible for the security of the sealed area.The civil court had appointed a court commissioner to conduct the survey and videography of the site and the same was challenged before Allahabad High Court, which dismissed the appeal on April 21. The April 21 order of the High Court was challenged in the apex court.

Five women had filed a petition in the court seeking permission for daily worship at the Shringar Gauri temple, which is claimed to be situated inside the Gyanvapi Mosque premises.The order of the civil court for undertaking survey and videography at the premises was subsequently given by the court. Gyanvapi Masjid Row: Survey of Kashi Vishwanath Temple-Gyanvapi Mosque Complex Commences for 2nd-Day.

Another petition, which was filed by one Vijay Shankar Rastogi, had contended that the entire premises belonged to the Kashi Vishwanath Temple and that the Gyanvapi Mosque is only a part of the temple complex, is also pending in the court since 1991. Rastogi had also claimed that the Kashi Vishwanath Temple had been built over two thousand years ago and the temple was demolished by the Mughal emperor Aurangzeb.