A tiger sighting around two kilometers away from Nyamakkad estate also added to the apprehensions of the locals, already in fear over the killing of their cattle, as some of them told a TV channel that they were afraid in view of the recent attacks. 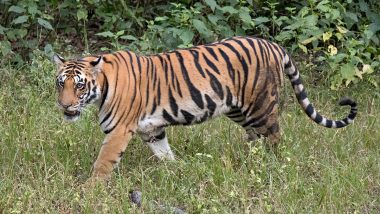 Idukki, October 4: Forest officials in Munnar area of this high-range district in Kerala on Tuesday stepped up their efforts to catch the tiger, which killed at least 10 cows last weekend in Nyamakkad estate here, by increasing manpower and using drones to look for the big cat.

The officials intensified their efforts after their attempts to catch the tiger by setting up three cages in the area did not fructify, a senior forest officer of the district said.

"We were hoping to catch it in the cages set up here yesterday. Unfortunately, it did not go as we had hoped for. We will examine if the tiger came anywhere near the cages and will also put up food in and around them," a forest officer told a TV channel. Man-Eater Tiger Outsmarts Hunter and Bihar Forest Department Officials, Flees With Goat Bait in Valmiki Tiger Reserve.

A tiger sighting around two kilometers away from Nyamakkad estate also added to the apprehensions of the locals, already in fear over the killing of their cattle, as some of them told a TV channel that they were afraid in view of the recent attacks.

As most of the local residents are estate workers, they have to go for work very early in the morning and that is why drones have been deployed to carry out surveillance in the area, another senior forest officer told PTI. Regarding the sighting of a tiger at a second location, the officer said it was around 2 km away from Nyamakkad.

"This is the mating season for tigers and leopards and as a result they are known to move in and out of the nearby Eravikulam National Park," the officer said and added that presently "there was no need to be panic." More Than 6,000 Trees Felled Illegally to Start Tiger Safari in Kalagarh Forest Division

He further said, "we are not putting a timeline on how long we will be present in the area, but suffice it to say we will be here till the issue is resolved." The Forest department on Monday had said that it has put up three cages in the region to catch the big cat besides deploying a 30-member team in two batches to locate the animal. Various traps including night vision cameras had also been set up to trace the movement of the tiger, it had said.

"Five cows were found killed on Saturday, while an equal number of them were killed on Sunday. We have initiated combing operations for the tiger," a senior forest official from Munnar had told PTI. The department had also handed over Rs 35,000 each to the owners of cows as interim compensation.