India and the United States trade talks on negotiations ended on Friday without making major progress on a range of disputes over tariffs. The discussions were kept on hold until Commerce and Industry Minister Piyush Goyal visits Washington next month. 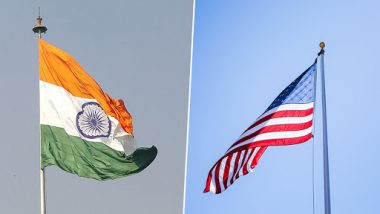 New Delhi, July 12: Unlike expectations, India and the United States trade talks on tariff negotiations ended on Friday without making major progress on a range of disputes over tariffs. Also, no major developments took place on the protectionist measures imposed by both sides that are straining bilateral ties, reports Reuters.

According to the report, published in the global news agency, the talks on relevant issues of tariffs on agricultural commodities, e-commerce, and steel and aluminium have been kept on hold until Commerce and Industry Minister Piyush Goyal visits Washington next month. Donald Trump Calls on Prime Minister Narendra Modi to Withdraw Recently Imposed Tariffs, Terms it 'Unacceptable'

Goyal is scheduled to visit the US in August for talks with United States Trade Representative Robert Lighthizer in August. However, the dates have not been finalised as of yet.

Officials with knowledge of the discussions stated that the US sought the rollback of Indian tariffs imposed on some of the agricultural products like almonds, while India has asked them to allow zero tariffs on a range of Indian products entering the United States. Donald Trump Rejects India’s 50% Tariff on US Motorcycles, Says ‘We're the Bank Everyone Wants to Rob'.

It is expected that though some issues are likely to be resolved in the next meeting in the US, nothing can be confirmed now. On Friday's meeting, both India and the US held discussion for 'addressing mutual trade concerns'.

Earlier, both sides resumed talks after Prime Minister Narendra Modi and US President Donald Trump met on the sidelines of the G20 summit in June. During the meeting, both have agreed to deepen the two countries’ relationship.

(The above story first appeared on LatestLY on Jul 12, 2019 10:59 PM IST. For more news and updates on politics, world, sports, entertainment and lifestyle, log on to our website latestly.com).