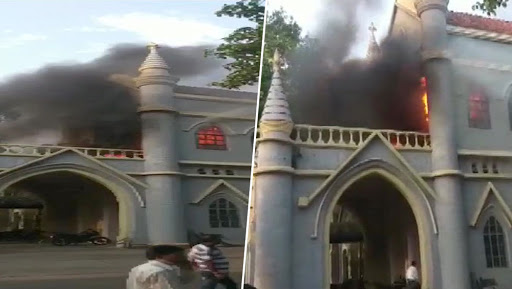 Jabalpur, June 10: A fire broke out at High Court in Jabalpur on Monday evening. According to the initial reports, fire services teams have been informed and they have rushed immediately to douse the fire. The rescue operation is currently underway, as five fire tending vehicles have been deployed.

According to the reports, no injury has been reported as of yet, however many important documents are reportedly destroyed. Soon after the incident, emergency services have pressed into action. People are currently been evacuated. Fire Breaks Out at Shastri Bhawan in Delhi, Firefighters at Spot

Earlier, in the day fire broke out at Shastri Bhawan in Delhi on Monday. Four-five fire tenders were present outside Shastri Bhawan to extinguish the raging fire. The cause of the fire was not immediately known. This is the second incident of fire in Shastri Bhawan in less than 50 days.

It is to be known that Shastri Bhawan, a government building, houses Ministries of Law, Information and Broadcasting, Corporate Affairs, Chemicals and Petrochemicals and Human Resources Development.