Kashmir: 10 Terrorists Belonging to JeM and LeT Killed in 3 Days 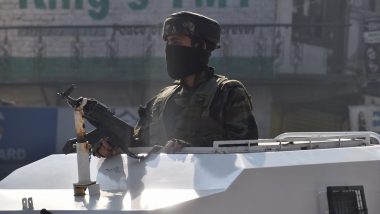 Srinagar, May 27: Ten terrorists belonging to the Jaish-e-Mohammed (JeM) and Lashkar-e-Taiba (LeT) militant outfits were killed in different security operations in Kashmir in the last three days, police said.

Of the 10 slain terrorists, three were from the JeM and seven from the LeT.

A total of four terrorists were eliminated in two separate encounters in Awantipora and Srinagar's Soura area, including those responsible for the killing of Kashmiri TV artist Amreen Bhat on Wednesday. Jammu & Kashmir: 3 LeT Militants, Associate Arrested for Sarpanch’s Murder in Baramulla District.

(The above story first appeared on LatestLY on May 27, 2022 11:06 AM IST. For more news and updates on politics, world, sports, entertainment and lifestyle, log on to our website latestly.com).