Haryana Chief Minister Manohar Lal Khattar on Saturday claimed that Khalistan supporter were present in the crowd of farmers protesting against the newly-enacted farm laws. The Haryana CM even claimed that some people in the farmer’s protest raised slogan supporting Khalistan. 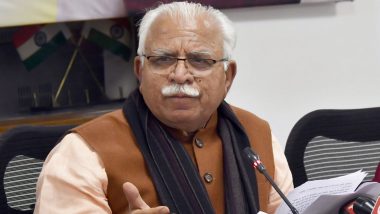 The Haryana CM even claimed that some people in the farmer’s protest raised slogan supporting Khalistan.  He added that in the videos going viral, the unwanted elements are threatening to kill Prime Minister Narendra Modi, like the way former PM Indira Gandhi was assassinated. Khattar said that reports would be disclosed only after a concrete proof. Farmers' Protest: Navdeep Singh, Who Turned Off Water Cannon, Charged With Attempt To Murder.

Khattar also hit out at Punjab CM Captain Amarinder Singh over the ongoing farmers’ protest. He held Capt Singh responsible for the protest by Punjab farmers against the central government. While interacting with media Khattar said that it was only Punjab farmers who were protesting and farmers from Haryana stayed away from the agitation. He also thanked Haryana police for exercising restrain in controlling the protest.

On Friday, farmers were allowed to enter Delhi to protest against the three central agricultural laws at Nirankari ground in Burari. The agitating farmers, most of them from Punjab, reached the national capital after braving tear-gas shells and water cannons at several places in Haryana.

(The above story first appeared on LatestLY on Nov 28, 2020 03:47 PM IST. For more news and updates on politics, world, sports, entertainment and lifestyle, log on to our website latestly.com).