The PLA and MNPF in a joint statement on Saturday night claimed responsibility for the ghastly attack, stating that they did not know that the Commanding Officer's family was also in the convoy. 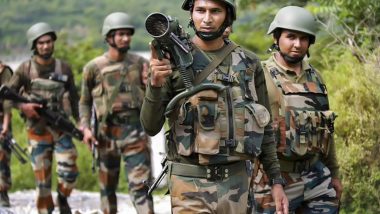 Imphal, November 13: In one of the deadliest terrorist attacks in recent times in northeast India, PLA and MNPF militants in a joint ambush gunned down an Assam Rifles Colonel, his family members and four jawans in Manipur's Churachandpur district along Myanmar border on Saturday, the police said.The PLA and MNPF in a joint statement on Saturday night claimed responsibility for the ghastly attack, stating that they did not know that the Commanding Officer's family was also in the convoy. Manipur Terrorist Attack: Assam Rifles Colonel, His Family Members & 4 Jawans Killed in Ambush by Terrorists.

"In the disturbed area, family and kid should not accompany. Chief of Army of PLA (Irengbam Chaoren) has congratulated the participating cadres in the operations," said the statement, signed by both the militant outfits' publicity in-charges. The police said the incident took place at around 11 a.m. near Sekhen village, as the heavily armed People's Liberation Army (PLA) and Manipur Naga People's Front (MNPF) militants opened fir on the convoy of Assam Rifles Colonel Viplav Tripathi, killing him, his wife, their 9-year-old son, three Quick Reaction Team (QRT) jawans and the driver on the spot. Manipur Terrorist Attack: President Ram Nath Kovind Condemns Terror Attack on Assam Rifles Convoy.

The militants attacked the convoy when the Colonel of the 46 Battalion of Assam Rifles along with his family members was going to supervise a civic action programme in Churachandpur bordering Myanmar, which shares around 400 km unfenced border with Manipur. For the first time, the militants in the northeast killed the family members of a security force official. The slain Assam Rifles jawans have been identified as Suman Swargiary, Khatnei Konyak, R.P. Meena and Shyamal Das.

The Army, Assam Rifles and the Manipur police commandos led by senior police and para-military officials have launched a massive combing operation in the area to nab the militants. The location is an extremely remote village more than 130 km north of state capital Imphal.

"The cowardly attack on an Assam Rifles convoy in Churachandpur, Manipur, is extremely painful and condemnable. The nation has lost 5 brave soldiers including CO 46 AR and two family members. My condolences to the bereaved families. The perpetrators will be brought to justice soon," Rajnath Singh said.

Manipur Chief Minister Biren Singh, who had last week appealed to the militants to come to the negotiation table to sort out their demands, if any, said in a tweet: "Strongly condemn the cowardly attack on a convoy of 46 AR which has reportedly killed few personnel including the CO & his family at CCpur today. The State forces & Para military are already on their job to track down the militants. The perpetrators will be brought to justice."

Manipur has over 40 outlawed insurgent groups, a large majority of them lying low following their signing of separate suspension of operation agreements with the government. In 2015, 20 para-military personnel were killed in an attack by terrorists in Manipur, after which the Army had launched a surgical strike on their camps.

(The above story first appeared on LatestLY on Nov 13, 2021 11:12 PM IST. For more news and updates on politics, world, sports, entertainment and lifestyle, log on to our website latestly.com).