On May 19, the IMD had said that the SW monsoon onset over Kerala was possible by May 25. However, both on Wednesday and Thursday, the IMD just mentioned further advance closer to Kerala but nothing about onset over Kerala. 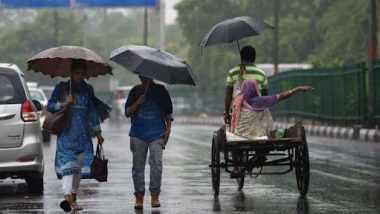 New Delhi, May 26: The wait for the most awaited news at this time of the year just got extended. Contrary to its earlier prediction of the onset of the Southwest Monsoon over Kerala on May 27, the India Meteorological Department (IMD) on Thursday said it can happen anytime this forecasting week (meaning till June 1) and the conditions are being monitored real time.

The news of onset of Southwest Monsoon over Kerala is the most awaited news for the agrarian practices across India that have a major impact on the domestic economy, including on the share markets.

"Conditions are favorable for further advance of Southwest Monsoon over some more parts of South Arabian Sea, entire Maldives & adjoining areas of Lakshadweep and some more parts of Comorin area during next 48 hours. Conditions are likely to become favourable for onset of monsoon over Kerala during the week," the IMD's Extended Range Forecast said.

This 'week' is the forecasting week, from May 26 till June 1, and that in turn means, the monsoon is expected any time till June 1. Asked for the specific reason for the delay, a senior IMD scientist said: "Our earlier forecast for May 27 did mention an estimation of plus/minus four days. Kerala's all 14 identified stations have not received rainfall even today." Weather Forecast: Wet Spell Over Northeast India Continues; No Heatwave Forecast for Next 5 Days, Says IMD.

Monsoon is a complex phenomenon and a number of criteria are to be satisfied before IMD declares onset over Kerala and is dependent on factors such as rainfall, wind field and Outgoing Longwave Radiation (OLR).

First, if after May 10, 60 per cent of the designated 14 stations enlisted in Kerala subd-division report rainfall of 2.5 mm or more for two consecutive days, the onset over Kerala can be declared on the second day, provided the other two criteria - with identified/ established specifications for wind field and Outgoing Longwave Radiation (OLR) - are also in concurrence.

On May 19, the IMD had said that the SW monsoon onset over Kerala was possible by May 25. However, both on Wednesday and Thursday, the IMD just mentioned further advance closer to Kerala but nothing about onset over Kerala.

(The above story first appeared on LatestLY on May 26, 2022 10:50 PM IST. For more news and updates on politics, world, sports, entertainment and lifestyle, log on to our website latestly.com).