The Road Transport and Highways Ministry had last month made the implementation of FASTags at toll plazas on the National Highways compulsory. 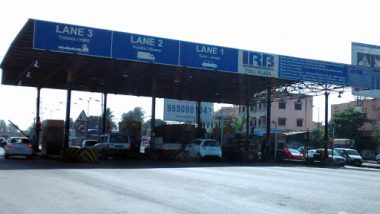 Mumbai, February 5: The cybercrime branch in the city has busted a gang running an online fraud. The gang made 4,259 fraudulent FASTag recharge-refund claims and siphoned off Rs 20 crore. According to a Times of India report, the cybercrime department arrested four people who were beneficiaries of the fraud money.

The banks were initially investigating the frauds internally and found that unidentified people had claimed huge refunds for the FASTags. Some of the accounts that had claimed refund were not functioning and few had even zero balance. FASTag Compulsory at All Toll Plazas of National Highways From December 1; Here’s How to Buy FASTag For Your Vehicle, Fines, How It Works and More.

Police added that the investigation could take a little longer time as the fraudsters transferred money from one account to several different accounts in different parts of the country. They also withdrew money from different ATMs which could take time to track.

The Road Transport and Highways Ministry had last month made the implementation of FASTags at toll plazas on the National Highways compulsory.

(The above story first appeared on LatestLY on Feb 05, 2020 09:52 AM IST. For more news and updates on politics, world, sports, entertainment and lifestyle, log on to our website latestly.com).