Even though FASTags are mandatory, toll plazas at five entry and exit points in Mumbai and on the Bandra-Worli sealink will accept cash payments. 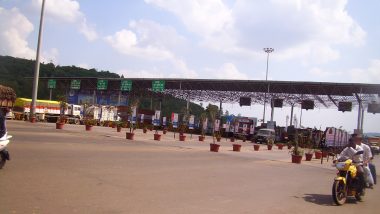 Mumbai, February 16: Even though the government has made digital toll payment across the country via FASTags mandatory on national highways, toll plazas at five entry and exit points in Mumbai and on the Bandra-Worli sealink will continue to collect cash payments. It means vehicles crossing the Bandra-Worli sealink and these five toll points can pay toll in cash. How to Get FASTag? What is The Fine If You Don't Have it? All FAQs Answered as FASTag Becomes Mandatory At All Toll Plazas Across India.

"All the lanes on Bandra-Worli sealink and five entry points of the city are FASTag-enabled. But to meet certain technicalities on part of the contractor we will not make it entirely compulsory in all their lanes thus leaving scope for cash collection in some lanes," MSRDC joint MD Vijay Waghmare was quoted by TOI as saying.

On the Bandra-Worli sealink, two lanes each will accept cash. "At entry points, only three to four lanes on either side will have compulsory FASTag payment with rest open for cash and FASTag both," Waghmare added. The traffic police in Mumbai is currently not imposing fines or issuing challans for not sporting FASTags on vehicles.

"Our only role will be to ensure there is no congestion at toll nakas. And if a law and order problem erupts, the local police station would step in," highway police superintendent Sunita Salunkhe told the daily. The Ministry of Road Transport and Highways yesterday announced that all lanes in the fee plazas on national highways shall be declared as "FASTag lane of the fee plaza" with effect from midnight of February 15-16, and vehicles without a valid FASTag would be charged double the toll.

Introduced in 2016, FASTags are operated through RFID technology to collect toll fees. The stickers are fixed on windshields and these are detected at the toll plaza by the readers.

(The above story first appeared on LatestLY on Feb 16, 2021 03:47 PM IST. For more news and updates on politics, world, sports, entertainment and lifestyle, log on to our website latestly.com).