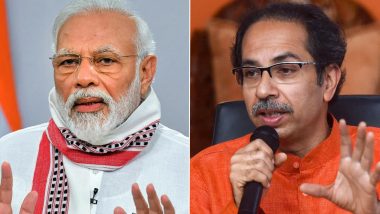 Heavy rains and strong winds continued to lash the Mumbai for the second consecutive day on Wednesday. Waterlogging was reported in the low lying areas of the city. Local trains were suspended on the harbour and central lines. Mumbai Rains: Heavy Winds Wreak Portion of DY Patil Stadium, Sway Lights of Wankhede, Bring Down Cladding of Jaslok Hospital (Watch Pics and Videos).

The National Disaster Response Force (NDRF) was called in to rescue people stuck in local trains due to waterlogging. The NDRF rescued some 150 passengers from a local train stranded between Masjid Bunder and Byculla stations on the Central line in Mumbai. At some places, water had collected upto three feet on the tracks.

The India Meteorological Department has predicted heavy rains to continue in the city on Thursday as well. Earlier in the day, Thackeray held a meeting with the BMC officials and asked them to remain on high alert.

(The above story first appeared on LatestLY on Aug 05, 2020 10:26 PM IST. For more news and updates on politics, world, sports, entertainment and lifestyle, log on to our website latestly.com).