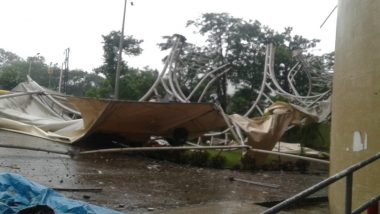 Mumbai, August 5: In what may emerge as the most devastating day of Monsoon 2020 in Mumbai, the city witnessed hours of incessent rainfall since the wee hours of Wednesday. Pictures flooded on social media show waterlogging in several areas. Along with heavy rainfall, strong winds were also reported in the city and neighbouring Navi Mumbai and Thane.

The DY Patil cricket stadium, located in Nerul area of Navi Mumbai, faced massive damage due to the unprecedented strong wings in the region. A portion of the stadium's outer railings, located behind the audience section, was severely damaged and broken away as per the visuals. Cabinet Minister Aaditya Thackeray Appeals People to Remain Indoors Amid Heavy Rainfall and Strong Wind Warnings.

Devastation in DY Patil Stadium. In mumbai, if you own a home in a building & your flat is not flooded, you are very lucky#MumbaiRains pic.twitter.com/WHuCQibK8g

Similarly, a startling scene was witnessed in Mumbai as the lights of the Wankhede stadium began swaying due to the high winds. The jittery visuals was captured by locals and uploaded on social media.

Watch Video of Wankhede Lights Swaying Due to Heavy Winds

The cladding on outer portion of the Jaslok Hospital in Mumbai also came down due to the incessent rainfall and heavy winds. The visuals were captured by locals. The grim footage showed the intensity of rainfall combined with rough winds that prevailed in the city from late afternoon till sunset.

The Mumbai Police, in a warning issued to locals on social media, asked everyone to remain indoors. Only those in need of essential services should step out of their house, said the police on its Twitter handle.

"We request Mumbaikars to stay indoors and not venture out unless it’s extremely essential. Practice all necessary precautions and do not venture out near the shore or water logged areas. Please #Dial100 in any emergency. Take care & stay safe Mumbai (sic)," the police said.

Maharashtra Cabinet Minister Aaditya Thackeray also took to social media, appealing Mumbaikars to not to venture outside their homes. "Requesting all to remain indoors. Mumbai is lashed with high velocity winds and extremely heavy rain as we all can witness. I request all, especially journalists trying to cover this to remain safe. Stay put wherever you are," he said.

(The above story first appeared on LatestLY on Aug 05, 2020 07:21 PM IST. For more news and updates on politics, world, sports, entertainment and lifestyle, log on to our website latestly.com).