Police officials said that the caller threatened to send the restaurant's owner to Saudi or Dubai if he failed to pay the extortion amount. 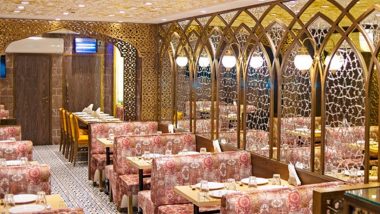 Mumbai, March 25: In a shocking incident, the owner of the popular restaurant chain Persian Darbar filed a police complaint after an unknown caller demanded 2 crore from them and even threatened to trouble them if the demand was not met. While the Bandra police are probing the case, the city crime branch has also begun a parallel probe.

According to a report in the Hindustan Times, the alleged incident took place on March 15 when the cashier of the Bandra restaurant identified as Syed Safir (59) received a phone call from an unidentified person. The caller, who introduced himself as one Rauf Sheth abused Syed Safir and his colleague at the Bandra restaurant over 2-3 phone calls the same day. Uttar Pradesh Shocker: 4 Men Gang Rape Woman After Tying Her Husband to a Tree in Muzaffarnagar.

"The caller checked with the cashier, if the owner of the restaurant chain was a Shia or a Sunni Muslim. He told the cashier to convey a message to his employer that, if he wished to continue doing business in Mumbai, then he will have to pay 2 crore hafta to him. He threatened that his (the employer’s) wife and children would be kidnapped, if he failed to meet the demand," a police officer said on condition of anonymity.

Police officials said that the caller threatened to send the restaurant's owner to Saudi or Dubai if he failed to pay the extortion amount. He even threatened to force the restaurant owner to embrace Hinduism, an officer added. Following this, the cashier informed his employer Talah Upletwala, managing director of the Persian Darbar group, who eventually reported the incident to the police.

Following a complaint, the Bandra police registered an FIR under sections 385 (extortion) and 506 (criminal intimidation) of the Indian Penal Code. Interestingly, the entire conversation between the unidentified caller and the restaurant staff was recorded and submitted to the police. We are trying to trace the accused by tracking the phone number used in making the threat calls, an officer privy to the case said.

When reached out for a comment, Talah Upletwala through his staff said that the restaurant management does not want to comment on the matter as a police investigation is underway. "We are working on it," Zonal DCP Manjunath Singe said when asked about the status of the case.

The restaurant chain, which started way back in 1978 has four restaurants in Mumbai at Bandra, Andheri, Byculla, and Kurla.

(The above story first appeared on LatestLY on Mar 25, 2022 12:26 PM IST. For more news and updates on politics, world, sports, entertainment and lifestyle, log on to our website latestly.com).