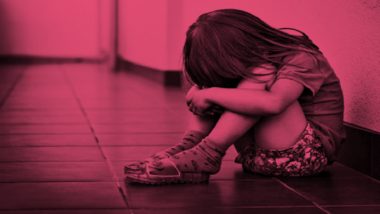 Bhubaneswar, December 13: In a shocking case of sibling jealousy reported from Odisha, an infant girl suffered frightening torture at the hands of her five-year-old sister who branded her with a hot fork in the absence of their parents. The elder girl committed the act because she was filled with jealously over her parents giving their undivided attention to the infant. Pune Shocker: Siblings Murder Woman Who Allegedly Had Affair With Their Father, Arrested

The infant suffered for almost a month until her parents got a CCTV installed following the suggestion of the doctor who was administering her treatment for red spots on her body. The CCTV captured her five-year-old sister branding her with a fork, taking everyone by shock.

According to a report in The Times Of India, initially, the parents were in the dark about the sudden appearance of random red spots on their child's body. Their child continued to suffer and would cry inconsolably. Commenting on the incident, the paediatrician, Vikram Samal said "When they had first come to me with their child, I had noticed that some red spots had darkened with time, while a few looked fresh. At first, I had thought it could be owing to sepsis or allergy. But despite being treated for more than a month, the child had developed new spots. Old ones kept getting healed, while new ones kept appearing.”

The child was treated for over a month, but she developed new spots, Samal said. “When the parents brought the child to me again after some days, I was sure the red spots were actually burns. I asked them if anyone was physical torturing the baby. They didn’t have an answer. Then I advised the parents to get a CCTV camera in her room,” the report quoted Samal as saying.  Uttar Pradesh Shocker: Missing 6-Year-Old Girl Found Murdered in Noida

The CCTC camera caught the infant being branded with a fork by her sibling. Whenever their mother was busy with household work, the elder girl would go to the kitchen, heat up a fork and used it to inflict burns on the infant’s body. She did this as she felt that the infant was receiving their parents' undivided attention.

(The above story first appeared on LatestLY on Dec 13, 2021 05:10 PM IST. For more news and updates on politics, world, sports, entertainment and lifestyle, log on to our website latestly.com).