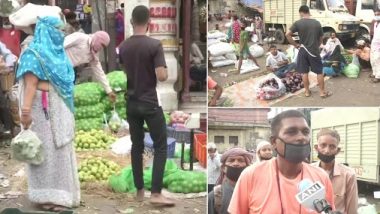 Fuel prices have been increasing since June 7 when oil companies began the daily price revision mechanism after a hiatus of 83 days due to the lockdown.  According to a tweet by ANI, a vegetable seller in Azadpur market expressed disappointment and said since transportation costs have increased, the market has become costlier. He added saying that sale of the vegatable and fruit items has decreased.' India’s Fuel Demand Reaches 80–85% of Pre-COVID Levels in First Half of June.

Delhi: Hike in petrol & diesel prices affects sale of items in vegetable and fruit markets. A vegetable seller in Azadpur market says, 'Since transportation costs have increased, the market has become costlier. Sale has decreased.' pic.twitter.com/aXD0VsORsO

The fuel price hike on Saturday is the 21st consecutive day of revision of pump prices. Only on Wednesday, petrol price was not increased by the OMCs. On June 25, diesel was priced at Rs 80.03 per litre in the national capital, higher by 14 paise over its Wednesday price when it surpassed the pump price of petrol in Delhi for the first time ever. The fuel price remained higher than petrol by 10 paise even on Thursday.

According to reports, although the fuel prices have continued to rise, the quantum of fuel price hike has fallen for the last few days from a high of 60 paise per day to less than 20 paise a day. Experts believe that if the price of petroleum products and crude continues its recent slide in the global markets, petrol and diesel prices can actually start falling soon.

(The above story first appeared on LatestLY on Jun 27, 2020 08:49 AM IST. For more news and updates on politics, world, sports, entertainment and lifestyle, log on to our website latestly.com).