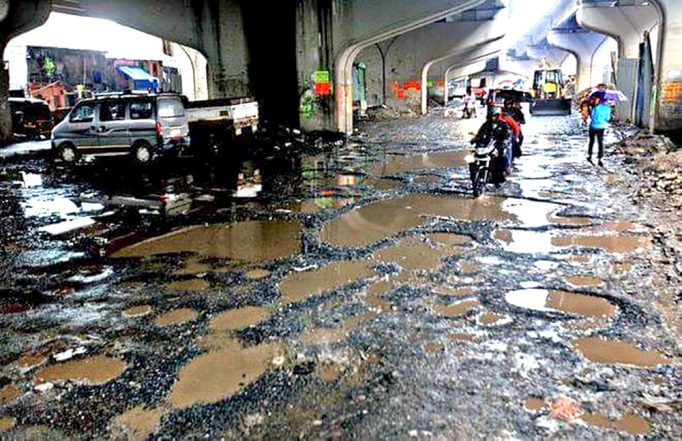 Mumbai, September 9: With incessant rains creating havoc for the commutation of the Mumbaikars, potholes are adding more injuries to their woes. In the latest, a couple sustained grievous injuries after their two-wheeler bumped on a pothole in Wadala area of Mumbai. The couple fell from their vehicle on Sunday night while they were returning home in Andheri. Pothole SHOCKER! 47-Year-Old Auto Rickshaw Driver Dies in Mumbai After Being Crushed Under His Vehicle

This is the second such incident in last two days when people suffered massive injuries due to potholes in the metropolitan city. Earlier on Saturday, a 47-year-old auto driver -- Panchmahal Nirmal -- was killed in an accident due to a pothole in the city, after his vehicle bumped on a big pothole. After hitting the crater, the auto driver lost control over the vehicle. Nirmal fell out, and he was crushed under his vehicle.

Last week, a five-year-old boy from Navi Mumbai's Ghansoli died after he was thrown away from a motorbike when his father hit a pothole on Ghodbunder road. He was crushed under a tempo. However, Brihanmumbai Municipal Corporation in August claimed that only 414 potholes were remaining in the metropolitan city that needs to be filled. They had claimed that they have already managed to fill 2,334 potholes, which is 84 percent work completed.  BMC Claims to Have Filled 84% Potholes in Mumbai, Says 'Only 414 Potholes Left in Megacity'

Meanwhile, Mumbaikars were surprised to the data revealed by BMC as the actual ground reality contradicts it. Since citizens having no access to the pothole data and the BMC not making it public, activists too opine that there is no way to check the actual number of potholes in the city.