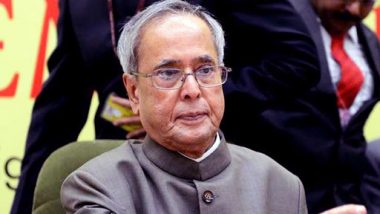 New Delhi, August 17: The health condition of Pranab Mukherjee, former President of India, continues to be critical, the Army Hospital (R&R) in Delhi informed on Monday. In its statement, the hospital said that Mukherjee's vital and clinical parameters are stable now and he continues to be on ventilatory support. The hospital said that Mukherjee's health condition is being closely monitored by the team of doctors there.

The 84-year-old had earlier tested positive for coronavirus. He also had a large brain clot for which he underwent emergency life-saving surgery, but remained critical subsequently and on a ventilator.  Mukherjee had undergone a brain surgery for the removal of a clot on August 10 after which he has not shown any improvement and his health status has worsened, the hospital authorities had said. Pranab Mukherjee Health Update: Former President, Who Tested COVID-19 Positive, Remains on Ventilator Support.

The condition of Pranab Mukherjee continues to be critical. His vital and clinical parameters are stable. He is on ventilatory support and is being closely monitored: Army Hospital (R&R), Delhi pic.twitter.com/9qVjAI8lsA

On August 10, Mukherjee had taken to Twitter to announce that he had tested positive for coronavirus. "On a visit to the hospital for a separate procedure, I have tested positive for COVID-19 today. I request the people, who came in contact with me in the last week, to please self-isolate and get tested for Covid-19", the tweet read.

On August 16, the Army Research and Referral Hospital in a statement said that the Former President's medical condition remained unchanged. "There is no change in the condition of Pranab Mukherjee. His vital and clinical parameters are stable and he continues to be on ventilator support. The health condition of the former President, who also has multiple old comorbidities, is being closely monitored by a team of specialists," the statement read.

(The above story first appeared on LatestLY on Aug 17, 2020 11:50 AM IST. For more news and updates on politics, world, sports, entertainment and lifestyle, log on to our website latestly.com).