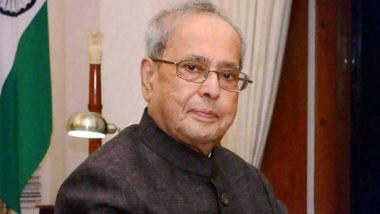 New Delhi, August 15: Former President of India Pranab Mukherjee continues to remain on ventilator support at the Army Research and Referral Hospital on Saturday, according to the latest health bulletin. Mukherjee, who served as the 13th President of India, was also found to be COVID-19 positive. The veteran leader was admitted to the hospital on Monday in a critical condition. He underwent emergency brain surgery five days ago. Pranab Mukherjee Health Update: 96-Hour Observation Period Ends, Former President’s Son Abhijit Mukherjee Says He Is Responding to External Stimuli and Treatment.

"The condition of ex-President Pranab Mukherjee remains unchanged this morning. He continues to be on ventilatory support. His vital and clinical parameters remain stable and are being closely monitored by a team of specialists," the hospital authorities said. After Mukherjee was hospitalised, it was found that he had a large brain clot. Subsequently, he underwent the emergency procedure. However, his condition has not improved since then.

The former President's son Abhijit Mukherjee had earlier refuted speculations around Mukherjee's worsening health saying his father is 'alive'. "My Father Shri Pranab Mukherjee is still alive and haemodynamically stable! Speculations and fake news being circulated by reputed Journalists on social media clearly reflects that Media in India has become a factory of Fake News," Abhijit Mukherjee had tweeted.

Mukherjee's daughter Sharmistha Mukherjee, who is also a Congress functionary, too had refuted the rumours about her father. She had also urged, especially media persons, not to call her citing that she needs to keep her phone free for any updates from the hospital.

(The above story first appeared on LatestLY on Aug 15, 2020 11:48 AM IST. For more news and updates on politics, world, sports, entertainment and lifestyle, log on to our website latestly.com).