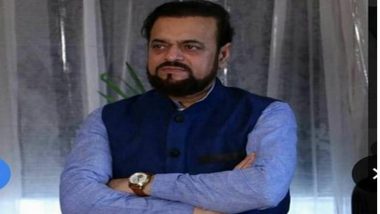 Mumbai, May 23: Senior Samajwadi Party leader Abu Azmi has claimed MNS chief Raj Thackeray deferred his Ayodhya visit as he got scared and that the latter would not go to the Uttar Pradesh city as he "does not have guts". Also, Thackeray's comment about his surgery scheduled soon was only an excuse to defer the Ayodhya visit, Azmi, who is the Maharashtra SP chief, told reporters in Pune on Sunday.

He said Thackeray's party had in the past allegedly staged violent protests against north Indians in Maharashtra and the "hatred sown by him was being answered with hatred".

Addressing a rally in Pune on Sunday, Thackeray claimed that political developments around his proposed Ayodhya visit were a ploy to "trap" his party workers into legal tangles and hence, he decided to defer his trip. The MNS chief also revealed that he was suffering from pain in leg and waist and has to undergo a hip bone surgery on June 1.

Hitting out at Thackeray, Azmi said "Raj Thackeray is worried, his politics is over" and claimed that nobody gives importance to the MNS leader (in political circles).

"He won't go. He doesn't have guts," claimed the SP leader, who is an MLA from Mumbai. The land of Uttar Pradesh is holy for Hindus, he noted, and questioned Thackeray about “beating and humiliating” north Indians through protests by the MNS in the past.

“I think Lord Ram does not want him to visit (Ayodhya)…The surgery and all are excuses. He doesn't have guts. He has got scared 100 per cent. If you sow hatred, you will get hatred in reply. That's why he is scared,” Azmi claimed. He said the Maharashtra BJP unit is allegedly with Thackeray, but in Uttar Pradesh, one of its MPs (Singh) is opposing the MNS chief's visit to Ayodhya.

The BJP should decide its policy with regard to Thackeray, he added.