Rajasthan: Married at 7, This 'Balika Vadhu' Got Freedom After 12 Years

Married at the age of just seven, a 19-year-old 'Balika Vadhu' of Rajasthan's Bhilwara district finally got freedom from the clutches of child marriage after 12 years. 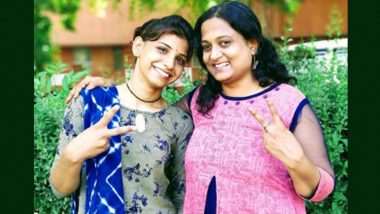 Jaipur, Sep 5: Married at the age of just seven, a 19-year-old 'Balika Vadhu' of Rajasthan's Bhilwara district finally got freedom from the clutches of child marriage after 12 years.

The Child bride, Mansi had knocked the family court in Bhilwara and pleaded for annulment of her child marriage. Hearing her plight, the Family Court Judge Harivallabh Khatri showed sensitivity and gave a strong message against child marriage by pronouncing a historic verdict of annulment of Mansi's child marriage. Child Marriage Stopped in Uttar Pradesh's Shamli District, Groom Along With 10 ‘Baraatis’ Arrested.

Mansi, originally a resident of Paldi in Bhilwara district, was married at the age of seven in 2009 to a groom, who was a resident of Baneda Tehsil. For about 12 years, she suffered the brunt of child marriage. During this, pressure was constantly made from the caste 'Panchayat' and others to get the 'Gauna' (a ceremony associated with the consummation of marriage) done. There were also many threats issued to the family.

Meanwhile, Mansi, after getting information about Dr. Kriti Bharti's campaign being run via the Saarthi Trust to annul child marriages, contacted her for annulment of her marriage. Dr. Kriti came to Bhilwara from Jodhpur and filed a case of Mansi's child marriage annulment in the family court in March this year.

Dr. Kriti Bharti appeared along with Mansi in the family court of Bhilwara, and made the court aware of the facts related to the child marriage.

The Judge of the Family Court, Harivallabh Khatri, delivered a historic verdict annulling the marriage of Mansi, which was solemnized 12 years ago at the tender age of just seven.

Mansi told IANS, "With the help of Dr. Kriti Bharti Didi, I have got freedom from the exile of child marriage. I am studying for my second year BA and now I want to study further and become a teacher."

(The above story first appeared on LatestLY on Sep 05, 2021 07:45 PM IST. For more news and updates on politics, world, sports, entertainment and lifestyle, log on to our website latestly.com).