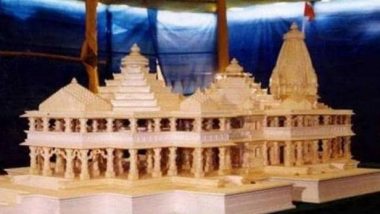 Davangere, August 4: BJP leaders and cadres of Karnataka's Davangere district will donate a 15 kg silver brick to Ram Temple at Ayodhya in the memory of eight martyrs killed in police firing during the Ram Jyothi rath yatra on October 6, 1990, an official said on Tuesday ahead of the groundbreaking ceremony for the Temple on Wednesday.

"We will personally go to Ayodhya and donate the 15kg brick valued at Rs 10 lakh to the Ram Temple after honouring the family members of the eight victims of the firing on October 6 here," party's district unit ex-president Yashwanth Rao Jadav told IANS over phone. Davangere is 260km northwest of Bengaluru in the southern state. Ram Temple 'Bhumi Pujan' in Ayodhya Live Streaming: When And Where to Watch Online Telecast of August 5 Foundation-Laying Ceremony For Construction of Ram Mandir.

Recalling the dreadful incident which occurred nearly 30 years ago, Jadav said the Ram Jyothi yatra was held in the town in support of the Rath Yatra then BJP president L.K Advani launched from Ahmedabad in Gujarat on September 25, 1990 for building the Ram Temple at Ayodhya.

"When the yatra (procession) was passing through Davangere, eight of our cadres died and 32 injured when police opened fire to quell a riot at Venkateshwara circle on Beturu road in the town," said Jadav.

Names of the eight martyrs will be inscribed on the silver brick in memory of them as a tribute to their supreme sacrifice as the party's cadres.

Though some of party leaders and cadres wanted to go to Ayodhya for the bhumi puja, they are unable to due to coronavirus pandemic, security and absence of regular trains. Ram Mandir Bhumi Pujan: Timeline of Ram Janmabhoomi-Babri Masjid Land Dispute Till The Day of the Foundation-Laying Ceremony.

"We will go to Ayodhya after October 6 on getting permission when normalcy returns and train services are restored," noted Jadav.

"If we are unable to go for any reason, we will send the silver brick through Udupi Pejawar mutt seer Vishwaprasanna Teertha swamji when he goes to Ayodhya after October 6," added Jadav.

(The above story first appeared on LatestLY on Aug 04, 2020 11:41 PM IST. For more news and updates on politics, world, sports, entertainment and lifestyle, log on to our website latestly.com).