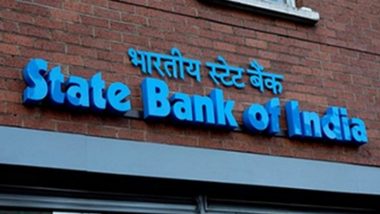 Delhi, June 30: In a major development, State Bank of India customers should note that ATM transactions are likely to become expensive from July 1, 2020, as the waived off fees ends on Wednesday, June 30, 2020. SBI had reduced the transaction fees for three months- April, May and June- due to novel coronavirus (COVID-19) pandemic.

The changes were brought by the state-run back after the Finance Ministry on March 24 announced that there should be no charges on transactions made through other bank's ATMs for three months. SBI Reports Over Four-Fold Jump in Net Profit at Rs 3,581 Crore for March Quarter of FY 2019-20.

"In view of the announcement made by Finance Minister on March 24, State Bank of India has decided to waive ATM charges for all ATM transactions made on SBI ATMs and other bank ATMs on account of exceeding the free number of transactions up to 30th June," SBI's official website had said.

Till now, the bank has not made any extension. Hence, it is likely that the old ATM withdrawal will get restored. The State Bank of India allows eight free transactions to the savings account, which includes five free transactions from SBI ATMs and three from other banks.

In non-metro cities, the SBI allows 10 free transactions, in which five can be made from SBI ATMs and five from other banks. After the limit is over, Rs 20 + GST is charged from cash transaction and Rs 8 + GST from the non-cash transaction.

(The above story first appeared on LatestLY on Jun 30, 2020 08:14 PM IST. For more news and updates on politics, world, sports, entertainment and lifestyle, log on to our website latestly.com).