Police in Assam have discovered a 200-metre-long tunnel connecting India and Bangladesh in Karimganj. 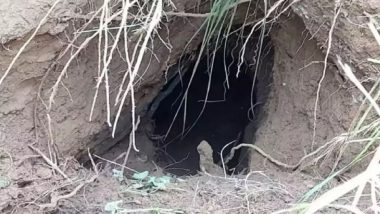 Karimganj, January 3: Police in Assam have discovered a 200-metre-long tunnel connecting India and Bangladesh in Karimganj. Cops found the tunnel connecting India and Bangladesh after a man, identified as Dilwar Hossain, informed them about it. Dilwar Hossain, a resident of Shilua village, came to know about the tunnel in Karimgang when he was abducted by criminals and reportedly taken to Bangladesh. BSF Detects Tunnel Along India-Pakistan Border in Jammu And Kashmir's Samba District.

Hossain was abducted on December 28. The abductors had called his family demanding a ransom of Rs 5 lakh. After he was rescued, Hossain informed the police about the tunnel on January 1. A search operation was launched after which the tunnel was unearthed. Karimganj Superintendent of Police Mayank Kumar said the tunnel is hidden deep inside a forest with a barbed fence over it. Pakistan, Apart From Jammu and Kashmir or Punjab, Explored Rajasthan, Gujarat Borders for Infiltration in 2020.

According to Hossain, the tunnel leads to Sylhet in Bangladesh and miscreants use it regularly to smuggle goods or take abducted people to the other side. "We can only say anything about the secret tunnel only after proper investigation. There are some serious issues in some particular areas. We have taken up the matter with the BSF and intelligence agencies," SP Kumar was quoted by News18 as saying.

"BSF has already been asked to close the Indian side of the tunnel," the senior officer added. There are 22 unfenced patches on the border between India and Bangladesh and miscreants use these places to infiltrate.

(The above story first appeared on LatestLY on Jan 03, 2021 11:45 AM IST. For more news and updates on politics, world, sports, entertainment and lifestyle, log on to our website latestly.com).