Pakistan, Apart From Jammu and Kashmir or Punjab, Explored Rajasthan, Gujarat Borders for Infiltration in 2020 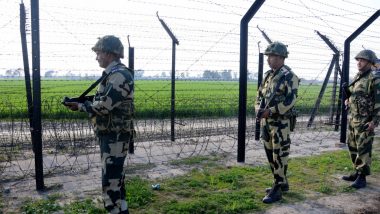 New Delhi, December 26: Pakistan in the year 2020 tried multiple routes for infiltration apart from sending terrorists through borders in Jammu and Kashmir or Punjab only. According to the Border Security Force (BSF), attempts were made by Pakistan from Gujarat and Rajasthan borders as well to infiltrate terrorists into the Indian side.

Data compiled by the BSF also says that the number of infiltration has increased. Last year, there were no incidents of attempts of infiltration from Gujarat and Rajasthan borders recorded by the BSF till the first week of November. Pakistan Threatens Google, Wikipedia for Sharing ‘Sacrilegious Content’ Online, Calls for Immediate Removal of ‘Unlawful Content’ From Its Platforms.

Officials claimed that Pakistan is exploring other ways to send terrorists but the BSF round the clock keep a strict vigil and regularly updating positions as per the intelligence input.

"We have seen incidents of infiltration attempt s from Gujarat and Rajasthan borders as well this year. Last year, no such incidents were recorded in the same period of time," a senior BSF official said.